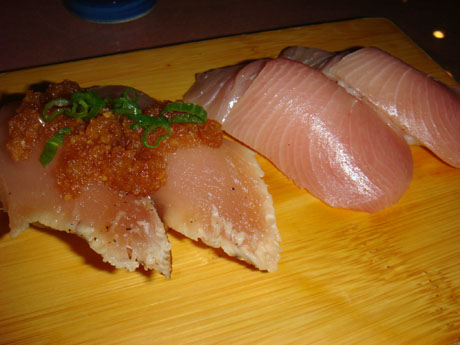 This place doesn’t try to confuse you at all.  They have the word “Fusion” in the name of the place so you know what you’re getting.  This restaurant is located east of the Los Angeles Little Tokyo area, right near Crazy Gideon’s on 3rd street east of Alameda.  3rd street is one way going West so you’ll have to go East on 2nd street. 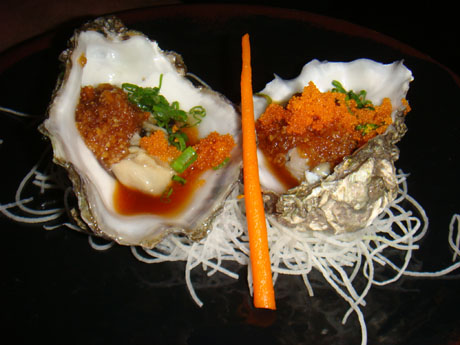 First up, big ass oyster on a plate.  The oyster itself was delish but the Ponzu sauce sucked badly.  Instead of tasting vinegary, it was more on the sweet side.  The sauce pretty much ruined the oyster for me.

Next, I had some nigiri sushi.  Although I didn’t like the sauce on the Albacore, it was still very good.  So was the Hamachi.  Excellent sushi here in terms of freshness, quality, quantity and simple presentation. 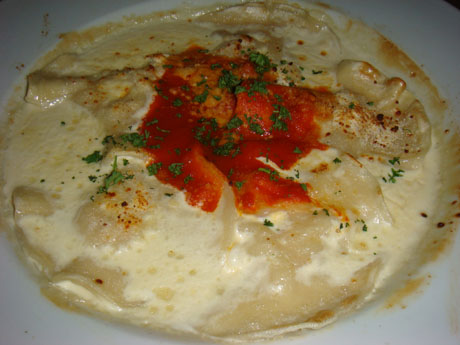 Since this is “fusion,” I had some Ravioli.  The plate was so hot, they put it on top of yet another plate.  However, when they first brought it to the table, they put it on the other side of my table, causing me to have to move it.  Nobody said anything about it being hot but I could tell that it was so I was careful.  After I moved the plate myself, the waitress came over to remind me that it’s very hot. Duh.

Although the skin of the ravioli is a little hard, I still liked it.  I don’t think I would order it again because it’s almost too much for me in terms of it being a little “heavy,” but it’s tasty.

There’s tons more stuff on the menu to try out here so I’ll have to return.  Yes, the green tea is $1.95 but this isn’t a sushi place.  They don’t even pretend to be.  It’s “fusion” baby.