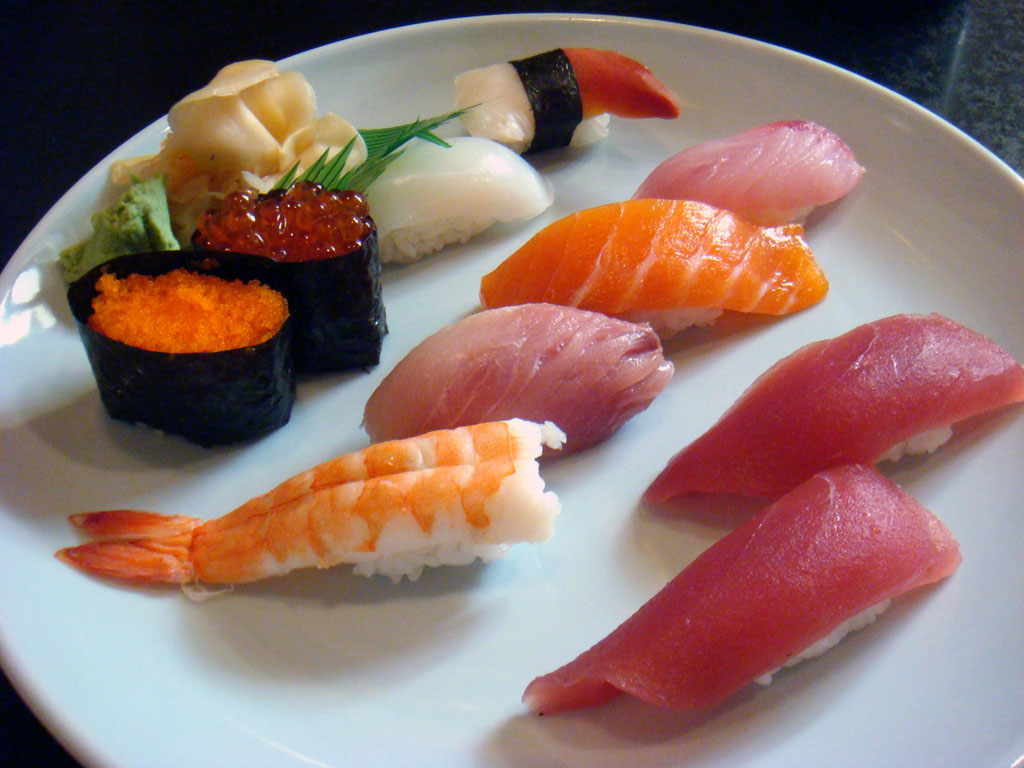 Oomasa is located in the Japanese Village Plaza in Little Tokyo, so park in the big structure off Central.  This place has been around a while and used to be open until 3am on weekends, but no longer.  After clubbing in downtown, this used to be a great place to get some good sushi.

As you can see from the Nigiri combination A above ($16), you get a fair mix of nigiri sushi, but it’s on a very plain plate and the portions are a little small.  But for $16, it’s a good deal, and it’s fresh and delicious.

I’m not sure if it’s because of their location at the corner of Central and 1st street, but this place gets a lot of traffic and sometimes there’s a line outside to get in.  You take a number and wait to be called like at the grocery store meat counter.

Along with my sushi, I also ordered some miso soup with nameko for $3.  Nameko is some type of Japanese mushrooms that are kind of slimy but very tasty in soup.  As per usual, I ordered hot green tea, which is free here.  As you know by now, this is an indicator that this is a traditional sushi place because of the free tea.

I’ve been coming here for over 10 years and one thing that’s consistent is the bad service.  It’s not only slow, but sometimes the waitress seems to be off her medication and/or just doesn’t want to be there.  It’s not horrible service, but not the level of service I expect from a good restaurant.  I get the feeling that they are either family members or maybe in-laws being forced to work there.  Or maybe not.

Come here for the food, not the service and you’ll be happy.  They also serve non-sushi Japanese food, including Ochazuke (rice in broth) and other cool traditional Japanese food.  The price is reasonable, and the sushi is fresh.