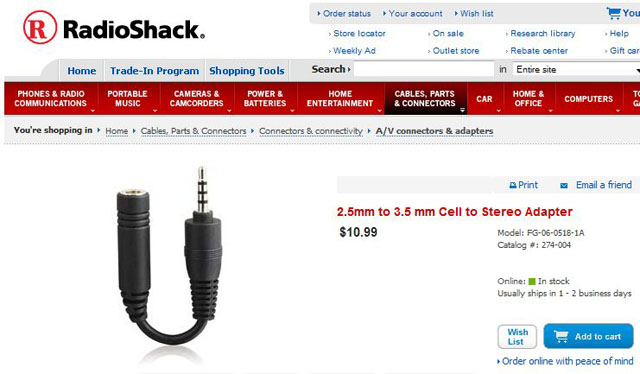 You may recall that I had a heck of a time getting an adapter for my LG EnV2 from Best Buy. Well, unfortunately for me, after only 24 hours of use, the adapter started to make scratching noises. It got so bad, it became useless in just 2 uses. What a quality product.

To make sure nobody buys this piece of crap product, I’ll put it’s picture below once again.  You can find it at Best Buy in the car & GPS section of the store.

Well, I still needed a working adapter so I finally broke down and checked the Radio Shack website.  Unlike the prices at Fry’s or Amazon, their price was a little more at $11.  That would be on the high side compared to the other places, but then it’s Radio Shack after all.  That’s what they’re known for.  But like 7-11, it’s really close.  In fact, there are no less than 4 Radio Shacks close to me.

Upon entering the store, the lady (yes, a female clerk at Radio Shack!) walked up and I explained what I wanted.  She went to the adapter section and they had everything there, including a Y adapter, 3.5mm to 2.5mm, female to female, except for what I wanted.

Interestingly, the one I wanted was placed in the cell phone area of the store, of all places.  The place that I would automatically assume it should be located, is exactly where Radio Shack put it.  The clerk told me that they had moved just that item over to the cell phone section recently.

These guys are a little smarter than Best Buy, that’s for sure.  Maybe there’s a reason why these guys have been around so long. The item is shown below on their website. 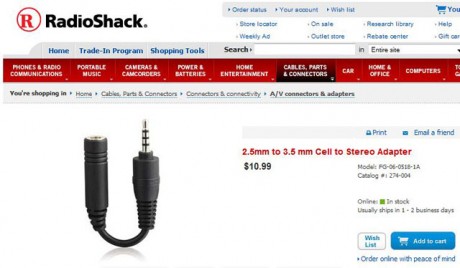 Although this adapter isn’t as slick looking as the one from Best Buy, at least it works.  So this round goes to Radio Shack of all places.

Previous: How to Hack Best Buy’s Inventory Bug
Next: How to Fix an Offline Network Printer in Vista