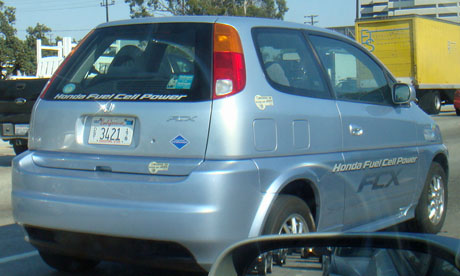 Honda FCX on the road

The Honda FCX, which has been around since 2007, was sighted on the 405 recently. Apparently, it’s a prototype and not available directly to the public. This one looks like it’s a dealer test car. The FCX is a hydrogen fuel cell, zero emission vehicle (ZEV) and the EPA has confirmed a range of 210 miles. Must be nice.

According to Honda’s website, the Honda FCX Clarity is their production model of this ZEV and about 200 vehicles will be available for lease in Southern California. I wasn’t even aware that Honda has such a car out in production. Looks like everybody else is going to be playing catch-up.