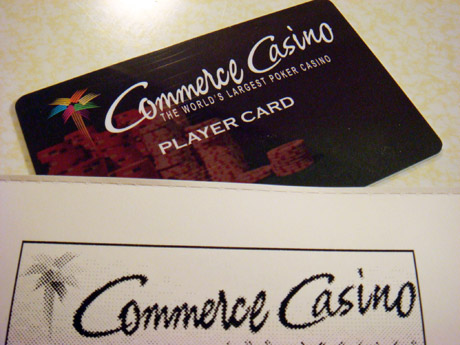 It’s been a while since I’ve done a tournament at Commerce so I decided to try their “Hold’em Series.” Their first of 17 tournaments was a multi-day $500,000 guaranteed one but I got there too late on the last day and it was sold out. They told me I could be an “alternate,” and would be able to get my money back if I decided the wait was too long.  My number was 600 something and after waiting for about an hour, it was only to 70 so I gave up and got my money back.

One thing new was they finally changed their player card to a thick credit card-like card instead of the thin paper-like card from before.  As before, they have a computerized system that prints out the player card with your name on it.  Nice technology they have there.

One new thing they added was an ID scanner called “SnapShell.” I tried to find out who makes these via google but was not able to find the manufacturer. There is a company in Santa Monica that OEMs them and sells the OCR software called Card Scanning Solutions. Basically, it’s a small device that has some type of scanner or digital camera with a light built into a  box as shown below. The user puts the ID right on the screen face down and an image of your ID is scanned into the computer. the OCR software then extracts the data right off of your ID. This software automatically recognizes IDs from all states and enters the extracted data into a database. When there are long lines of people waiting, this can save tons of time compared to an operator manually entering the data.

I returned the following week for another multi-day $400,000 guaranteed tournament but only lasted about 4 hours. Although the rounds are 40 minutes long, you start with only 3,000 in chips so one big mistake and you’re stack is low. I tried to make a move and got caught and lost half my stack. From there, it was a struggle and a slow death.  The lesson there is, when you are playing a small stack tournament, don’t’ try to get too tricky until you build up your stack.