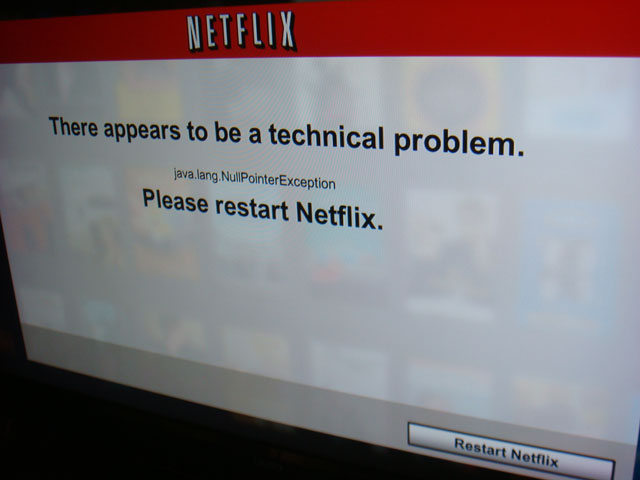 Not a good start

After trying out Redbox, I decided to try Netflix on the PS3, which streams movies directly to your HDTV for only $7.99 (streaming only with no DVDs by mail). Using the PS3 to sign up turned out to be a little harder than I expected. First, I got the error shown above.

Restarting didn’t fix anything so I deleted Netflix, and re-installed it with the same results. The only way I was able to fix it was to go to the Netflix website from my computer and sign-up, then delete and re-install the app on the PS3 and try again. I did finally manage to get things working but if a techno geek like me had some problems, I hate to see what would happen when the typical grandma tries this. I guess she wouldn’t have a PS3 anyway.

Once I got everything setup, I noticed that a lot of the movies available on DVD (via snail mail) are not available for streaming. But right now, they have a one month free trial period so it’s a good time to try it out.

My main concern was the quality of the stream. To my surprise, the video starts to stream in a few seconds and although not full HD quality, it is very good. The quality is about as good as what I got on my Tivo via Amazon Unbox, except that version had to download the entire movie first before viewing. My HDTV says it’s in 1080p mode but I think that’s the PS3 upgrading the video to that resolution.

When the video first starts, there’s a slight resolution deterioration, but after a few seconds, the resolution will improve to an acceptable level. Once in a while, there’s some color artifacts, especially when the scene is very dark, but for the most part, movies look fine. If you are in love with your Blu-ray high resolution movies on your 70″ screen, you might have a problem. Otherwise, you’re good.

The biggest problem is the lack of brand new movies. But they do have a long list of older movies, including a lot of classics that you may have missed. There’s plenty of content to check out, especially if you’re trying to do it in the one month free trial period.

Also, don’t forget you can still stream movies to your computer at home or at work, as well as to your iPhone.