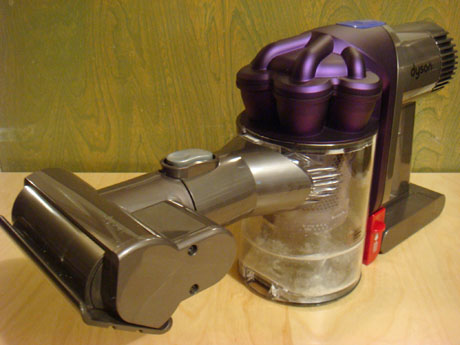 After getting a new black couch, I realized that every little piece of lint, hair, dandruff, and Cheetos dust shows up like DNA under black light. During Black Friday, I decided to look around and found a good deal on Best Buy online for a Dyson DC31 Animal hair “hand-held” (quotes intended) vacuum cleaner.

This version is normally $270 but during Black Friday, it was about $220 with tax. I have the regular full sized Dyson vacuum cleaner and I really like it’s performance so I decided to get this blind, without looking at it at the store first.

When I took it out of the box, I was a little surprised at the size. I was expecting something a little closer to the old hand-held vacuum I used to have from Black & Decker, or even the free one from Oreck with a cord. To get an idea of how big this is, the picture above shows the device and the height is over a foot and weighs 3.3 pounds. So if you’re weak, this vacuum is not for you. It’s like a big gun with a red trigger.

The two features that I wanted for a handheld vacuum were bagless and cordless (with rechargeable battery), which this unit has.

You can see the brush that rotates in the head in a close-up view below. 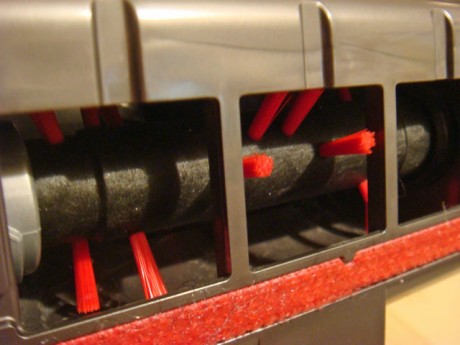 This unit is made for people with pets so it’s really strong and will pick up anything and everything. There’s no doubt about the strength of this unit and because of the bagless design, it’s easy to clean with nothing to replace. The lever for dumping the dirt is shown below in close-up. This level causes the bottom of the collector area to open like a door and allows you to dump the dirt and dust. Sometimes the crap inside gets stuck and it can be a little bit of work to get it all out. 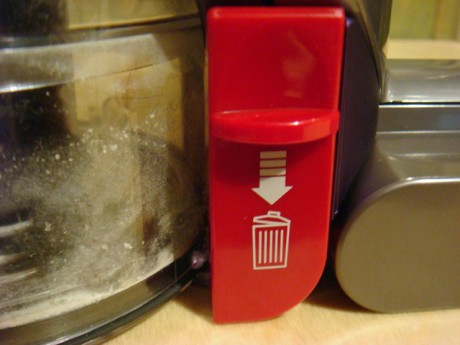 Release lever for the dirt

The only consideration for this unit is the size and weight. I would strongly recommend that you go to the brick and mortar store and pick it up yourself to determine if it’s too big for you or not. It might be too heavy for older people so probably don’t buy this for your grandmother. For younger folk, it’s a good workout for your arm and I recommend it over anything else I’ve seen so far.