Many Angelenos know about the sushi Nazi at Sushi Nozawa in Studio City. What I wasn’t aware of  is that he and some investors have decided to open a chain of sushi restaurants called Sugarfish around Los Angeles. The idea that you can duplicate the “Trust Me” sushi at multiple locations is somewhat counter intuitive.

Nonetheless, we decided to try the Brentwood version of this experiment. The restaurant is located in a strip mall so parking is no problem. However, the actual restaurant is tiny and they do not take reservations so come early or plan on waiting a while to get in.

All the 3 choices come with Tuna Sashimi which comes with the perfect sauce that makes the sashimi taste completely different from dipping it into regular soy sauce.

As for the nigiri sushi, the rice is warm and is not packed tightly and is loose and will break apart. Traditionally, it’s proper to use your hands when eating nigiri sushi so that might be the best way to eat these nigiri sushi. However, the ponzu sauce makes it a little messy if you use your hand.

The point is, all the nigiri sushi are absolutely amazingly delicious. When they tell you it will melt in your mouth, it’s not an exaggeration. If you’re one of those people that don’t like chewy sushi like octopus, you’re in the right place.  Frankly, I don’t think this is strictly traditional nigiri sushi but if not, it’s better than that. 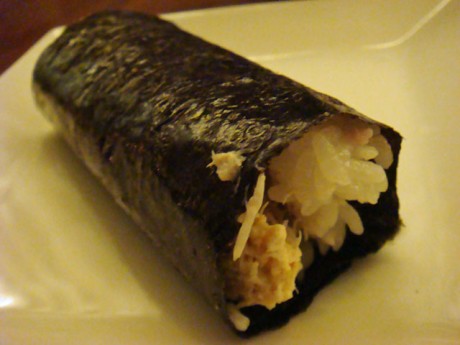 They have kept the Nazi feeling here by having the waitress tell you to eat the plates right away before the nori (sea weed) becomes soft and telling you not to dip the sushi that has ponzu sauce into soy sauce. Hey! Don’t tell me how to eat my food. Okay, they’re right but I just don’t like being told what to do.

What’s very surprising is the service. They bring the plates as the sushi is prepared so that some people in your party will get their sushi first, which is unusual. Personally, I have no problem with that. What I have a problem with is that the server did not ask if I needed more green tea even once on 3 separate trips. This is exactly the opposite of what happened to me at Mori Sushi where they basically stalked you constantly filling and re-filling your green tea.

On one of my 3 trips there, we didn’t even get a menu for about 10 minutes, even though people were being served next to us.  Any competent server at Denny’s would be better. On top of that, a bottle of beer was dropped by the waitress at the table near us and splashed everywhere. I watched the entire event from the start and the way she was serving the bottle tells me that this waitress has never served beer before, let alone know what to do when it is dropped to the floor.

Don’t get me wrong. I wouldn’t categorize the service here as “bad,” but certainly questionable for a Nazi place where they tell you how and when to eat.

I could be wrong but it appears that the servers are completely inexperienced. Perhaps, this is a way to save money. If so, this is a really bad business decision and might be the only reason for this place not succeeding in the long run.

And no, the green tea is not free.

Whatever is going on with the service, that’s about the only fault I can find in this place. The food is certainly unquestionably good, and affordable for the excellent quality.