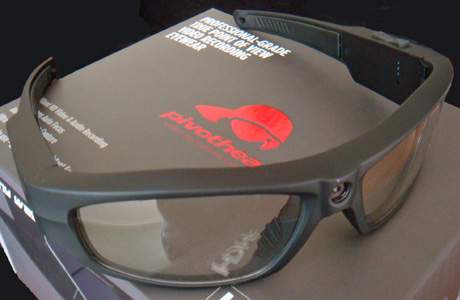 Last time, I gave my first impressions of the Pivothead Video Recording Eyewear in my review, including some design complaints. This time, I will review the quality of the video and still shots from the Pivothead.

First off, after you record your video, you connect your eyewear to your computer via a provited very short USB cable. It’s a standard cable so you can use your own longer one if you want. Your Pivothead shows up as a regular drive as shown below.

The first video is of Weller Court Mall in Little Tokyo. I’m coming from an underground parking lot, up to the ground level, during the day. You can see that when I first come up to the bright light, there is a little lag while the camera adjusts the lighting level. You can also hear the clicking sound when I press the still picture toggle button 2 times during the video.

These are the pictures that were taken during the video. You can click on the pictures to see the full resolution version of the pictures. I have the Pivothead set to the middle still image resolution which is about right for blogs. If you want to print them out, you will probably use the high resolution setting.

Keep in mind that there is no preview video while you are recording. So as you can see from the picture below, the top of the spaceship is cut-off. I would never shoot a picture like that normally, but without a preview, you really don’t know exactly where the picture ends. Of course, if you wanted to take well framed pictures, you shouldn’t be using a video eyewear device.

Here is the second picture from the Weller Court video below. 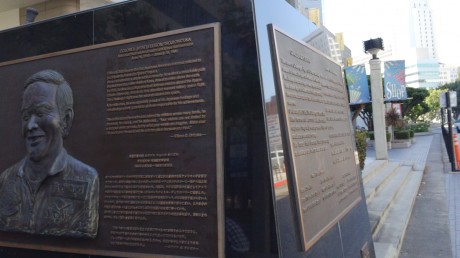 Now I walk around the Japanese Village Plaza Mall in the next video. I walk through some shaded areas and the camera seems to adjust accordingly. However, walking around a lot does create some shake, not unlike holding a regular camcorder in your hand while walking. Once again, I take a picture and you can hear the click in the video.

Picture taken in video above. 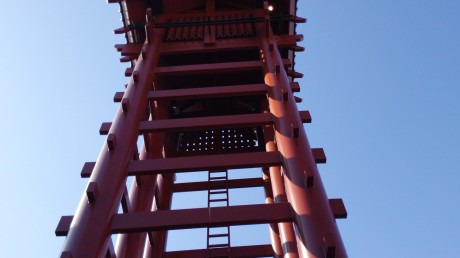 Next, I test night outside lighting in Westwood. This time, I’m walking quickly and the shaking is worse. It’s at the Blair Witch level of shake and would not make for a good video other than for some family vacation level usage. However, low light video quality is good.

Lastly, I enter a CVS at night with indoor lighting. As you can see, the regular indoor lighting is more than sufficient to make the video bright and you can see all the detail in the store. Notice also that you can hear the ambient noise and conversations going on as I walk past other customers.

There are no tests of the time lapse mode because it doesn’t make sense to me to use this mode on a device that you wear. Time lapse should be done with the camcorder on a tripod. If you move around a lot, the time lapse video will be ruined because you won’t be able to tell what is going on with all the movement.

Other than the complaints from my first look review, I would like to see a wider angle lens on this Pivothead eyewear. That would reduce the shaking while walking and also make it easier to capture the subject without trying to figure out if your head is pointing in the right area.

The video quality is good considering how small the lens and camera are. The battery lasts for a reasonable amount of time, even though it’s a tiny one imbedded inside the eyewear. The still pictures are good for a video recording device. Of course, you don’t expect it to be as good as an expensive digital camera, but it’s a great feature to be able to capture stills while video recording.

All in all, if you need to record action video and have both hands free, and not have everybody and his brother stare at you while you are recording, this might be the solution for you.  Unlike the GoPro, which mounds on your helmet or bike, you don’t really need to be prepared to record. Just put on your eyewear and you’re ready. That’s the biggest difference. If Pivothead put a wider lens on it and made it water proof, it would be a no-brainer.