Back in February, Pivothead announced that they were coming out with a POV HD video recording eyewear in April or so. True to their word, the first 2 of their eyewear models are out with 2 more coming in July. Since I will be using mine in both outdoor and indoor use, I decided to get the Durango Chameleon model, which has lenses that darken in 7 seconds when you go outside for $349 minus a $25 discount for signing up as an early adopter.

As you can see, although this eyewear is not the geekiest ones that I’ve ever seen for a video recorder, you probably won’t be modeling for a magazine wearing them. It feels and looks more like something out of a Sci-Fi movie. The frame temples are rubber-tized so they won’t slip off your head while doing your crazy X-Games moves.

From what I can tell, all the hardware seems to be inside the left frame temples as shown below. There is an USB rubber cover that reveal the connector underneath. To the right of this connector, you can see the power button, which when pressed will cause a blue LED to come on indicating it’s ready to record. 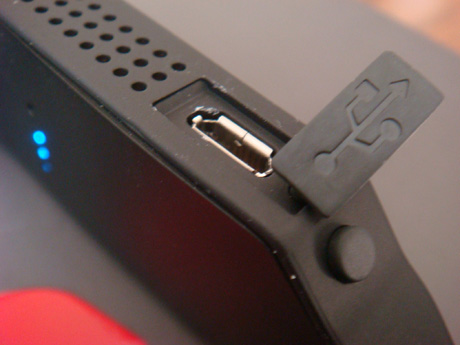 When you flip the glasses over, you will see the toggle switch which allows you to start recording by pressing forward. The red LED will blink while you are recording. To stop recording, press the same toggle forward again and the red LED will turn off. At any time, even while recording video, you can press the toggle backward to take a still picture.

Unfortunately, you cannot see the LEDs while wearing the eyewear. This is a big design flaw in my mind. If they could have moved the LEDs just slightly forward, you should be able to see them without having to move the eyewear. Hopefully Pivothead will fix this in future versions.

My biggest complaint is when you put the eyewear in power save mode, it will automatically turn off after a while. However, because you cannot see the power LED, you might think you are recording when you aren’t. To make things worse, it takes about 2 seconds for the power to fully come on so if you assume the power is off, and press the power button, then immediately press the record toggle, it won’t record because the power is still off. You have to count to 3 or so, then press the record toggle. If somehow you mis-time this procedure, when you press the toggle again to stop recording, you will actually start recording instead. This happened to me several times. 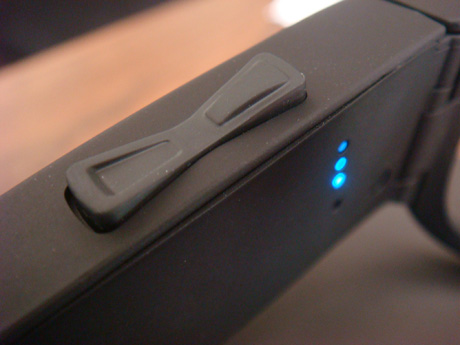 One of the first things I noticed is when you take a still picture while video recording, you can hear the “click” of the toggle on the audio track. This is very similar to regular video recorders that I’ve used where even using the zoom toggle will often cause audio noise to be recorded. It can be a little annoying but not something that doesn’t happen with other similar devices.

Here is a closeup of the lens in the center of the frame between the lenses. It’s not hidden and would not be a good idea to try using this eyewear for undercover DEA work. 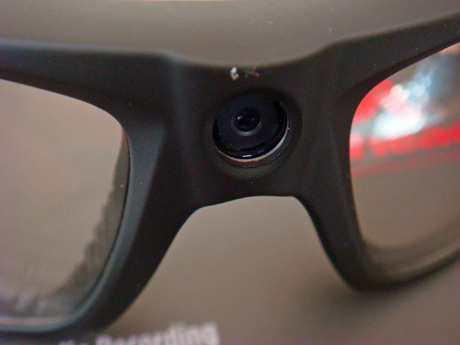 The eyewear also comes with a case that has a zipper to close and a belt loop, as well as a USB cable to connect your eyewear to your computer or laptop. 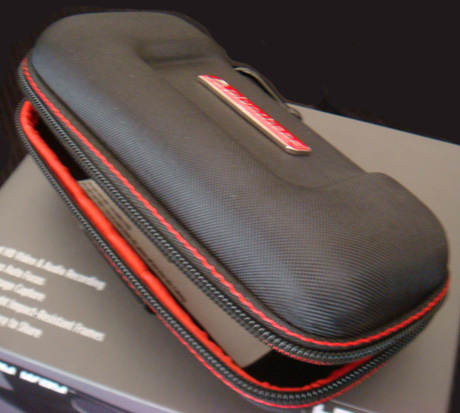 You can download software for your MAC or PC to be able to change the setting for your eyewear. There are tons of settings you can change, including the video resolution from 1080p @30fps down to 720p @30fps, as well as the resolution of the still images from 8MP down to 3MP. You can also do time lapse photography and change the exposure settings. Most of the settings are not changeable without this app, except for the video resolution which can be changed using the toggle button. 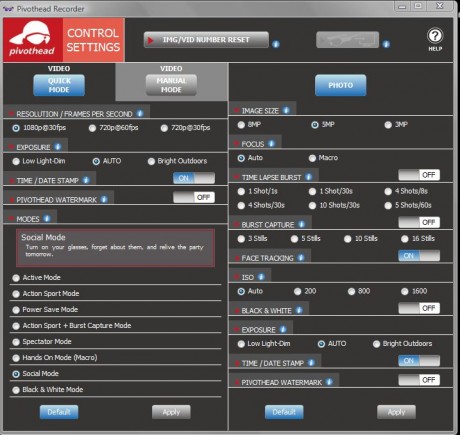 The Pivothead eyewear is amazingly light and very comfortable to wear and would not bother anybody who wants to make POV recordings. Pivothead says you can record 60 minutes of HD on the 8G provided and the battery should last long enough for that recording mode.

All in all, although not cheap, the quality of this POV recording device is good, although not fashionable, and the video quality is also acceptable. The microphone will pick up pretty much anything that goes on near the eyewear and can be optionally turned off using the software.