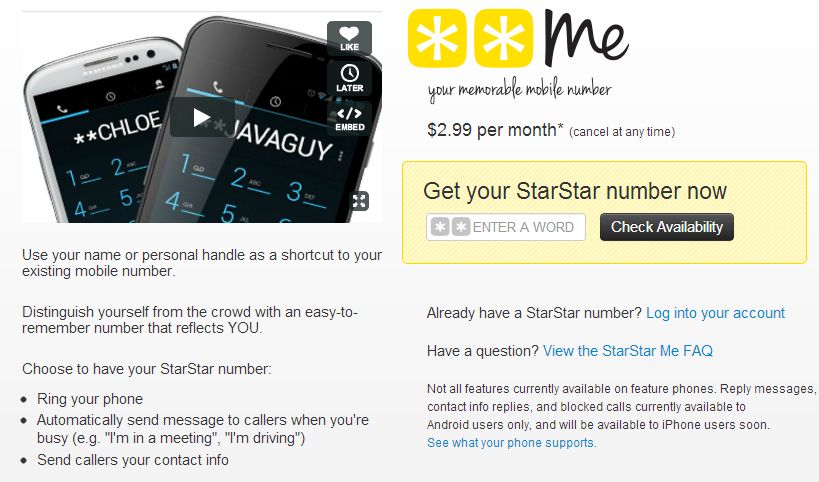 Sprint has teamed up with Zoove with a new service called Star Star Me which provide consumers with a “star-star” number.  The customer picks their own vanity number using letters and numbers (5 to 9 characters long) and that becomes their secondary phone number that people dial with a “star-star” in front of it.

This service is currently only available to Sprint customers for $3 per month, but it will soon be available to other carriers. For the $3 per month, you also get a “free” webpage at http://ssme.to/yourname where you can give out other vital information about yourself.

The service also includes a free smartphone app (Android only for now) that allows you to redirect the call so the caller gets a text message, or even automatically direct them to your free webpage.

Another interesting feature that is in the app is the ability to block specific numbers. I’ve personally never needed this feature before but this might be good for sales or retail people who give out their numbers to everybody and his brother.

Personally, I don’t memorize anybody’s phone numbers so it doesn’t really matter if their number is 5 digits or 10 digits. I guess the only time it might come in handy is if you just want to tell somebody your phone number and you’d rather say “STAR-STAR-JAVAGUY” than your 10 digit phone number.

Since you can cancel this feature at any time without a fee, I decided to try it out. Sign-up was really quick and easy and it was ready to use in just 3 minutes, according to the website.

When I tried calling myself from my pre-paid Virgin Mobile phone, I got a recorded message that my account does not allow me to call these types of numbers. According to their FAQ, the service only works with calling phones on Sprint, Verizon, T-Mobile, and AT&T. This might be a deal breaker for many because this means you can’t randomly tell people your number without asking them if they have Virgin, MetroPCS or some other off-brand service.

However, the StarStarMe app did register that I had called the number from my Virgin phone. Weird. It just didn’t go through. When a call does go through, you do get the phone number of the caller as if they were calling you directly to your regular phone number.

Also, currently, people cannot text you to your StarStar number. Only regular voice calls come through. One other anomaly I found is, if you text your StarStar number to somebody, and they touch that number in the text to call it, it may not work properly. I had this happen when a friend tried it on his iPhone. This might be because on some phones, STAR-STAR is interpreted as a pause. I’m not sure if that’s the reason but when he dialed it manually, it worked.

One last deal breaker is that the vanity number is not transportable. If you switch to another carrier, you lose your number. So if you thought this would be a great way to have the same number forever, forget it.

All in all, this service is not ready for prime time. Let me summarize it for you. The service is only available to Sprint users and only works on the 4 big carriers for callers. You cannot text to the number and no iPhone app available yet. Worst of all, the vanity number is non-transportable.

If they were to fix all these deficiencies… it’s still not very useful.

Update June 2013:
I checked back on the starstar.me website and they now support AT&T, T-Mobile and Verizon along with Sprint. They also have an iPhone app now.