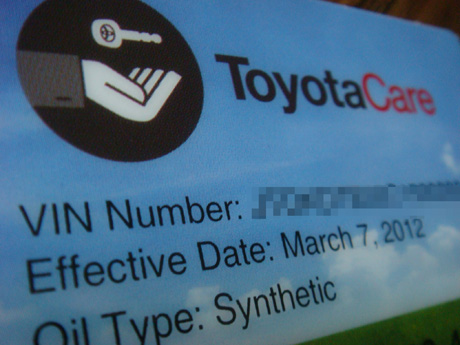 Since my purchase of the Toyota Prius c, I’ve not had a chance to use my Toyota Care complimentary maintenance and roadside assistance. Until yesterday.

While driving on the freeway, I suddenly notice a power loss as the car quickly decelerated.  Back in the day, my car breaking down on the freeway was a regular occurrence so I quickly changed lanes to the right shoulder to pull over. From my gas gauge, it looked like I ran out of gas somehow. Because it’s a hybrid car, it keeps going on electric power even after you run out of gas. Strange feeling.

After putting on the emergency blinkers, I noticed that there was a warning light that was on. As you can see below, it’s a circle with an exclamation mark to the right of it. 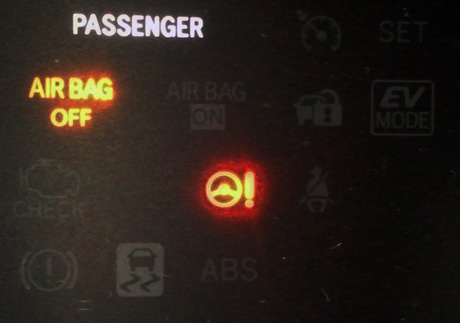 Amazingly, I remembered about the Toyota Care 24 hour road side service and called the 800 number. An automated system asked if it was alright for them to use my GPS to get my location. I agreed, but knowing my GPS setting on my phone is probably blocking the location. Next, a very pleasant voice answered and I explained my situation and asked if she knew what the indicator meant.

Unfortunately, it was apparent that the person helping me did not have any Toyota specific information. She asked general questions but never anything specific, even though she knew what type of car I had from my VIN. She asked me twice if I had my Toyota manual to look it up. She straight out told me that they don’t have access to the manuals there.

With the Internet, and the current computer technology available, it’s very strange that they don’t have an automated system that brings up the manual specific to the model of car that the driver is in. At the minimum, couldn’t they pop-up a window that has the explanation of the indicators? It would be so easy to do.

I told her that I needed gas but since I didn’t know what the indicator meant, I may need a tow also. She then explained to me that this would be 2 separate problems and that’s how she would have to enter it into the computer. I told her to just send a tow truck and have him bring gas. For some reason, she didn’t understand this concept.

In any case, they said they would send out a tow truck to my location, which I had to give. It was obvious that the person I was talking to was not in Los Angeles, since she didn’t know what the 10 freeway was. Strangely, she told me that she cannot give me an ETA but that I would get a text message with the ETA. So the Toyota Care computer is so disconnected from the towing system’s computer that they can’t talk to each other to relay the ETA information. Why is this so hard?

Luckily for me, this story has a happy ending. As I was literally hanging up the phone with Toyota Care, a tow truck stopped behind me. I was so surprised at how fast the service was, I almost jumped out of my car. Actually, it turned out to be the Metro Freeway service that found me by accident. I didn’t even realize anybody can call #399 to get free service.

The Metro guy gave me a free gallon of gas and I was quickly on my way. I didn’t even have to call work to tell them I was going to be late. Later, I got a text message telling me the tow truck will be there in 55 minutes. I called the tow company to tell them to cancel the order. However, the Toyota Care system kept calling me, telling me the tow truck was still on it’s way. I just ignored it. I already realized that the tow truck company computer and Toyota Care computers were not talking to each other.

After I got home, I looked in my Toyota manual and found out the indicator was the Electric power steering system warning light. Not sure why this indicator came on but after I filled up with gas, it went away. Maybe the power steering doesn’t work properly without gas. Not.

This incident made me think that I needed the indicator list in my car for future reference. In case you have a Toyota Prius c, you can download that page and print it out: Download a printable warning indicator list.

Now the Toyota Care rep can print this out and keep it next to their computer.