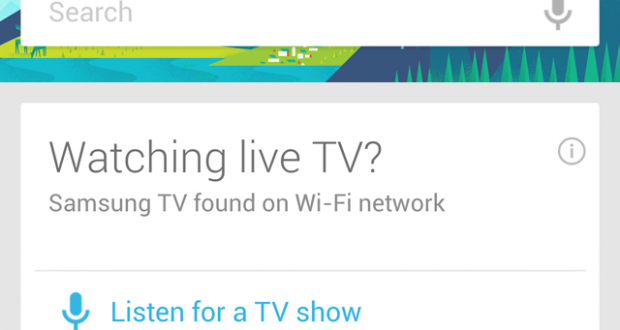 Recently, Google Now has included what they call “On TV Now” into their Android Google app. If you have a WiFi connected TV, like my Samsung 55″ LED HDTV, and your Android phone is also connected to the same WiFi, “On TV Now” will automatically recognize that you have a TV and ask “Watching live TV?” as shown above. When you click on “Listen for a TV show,” the app will “listen” and send the sound to their servers and figure out what show you are watching.

Then the app will show you information pertaining to the TV show. If a commercial is on, sometimes it will work, and sometimes it won’t. Of course, the volume has to be high enough for the phone to hear the sound from your TV. 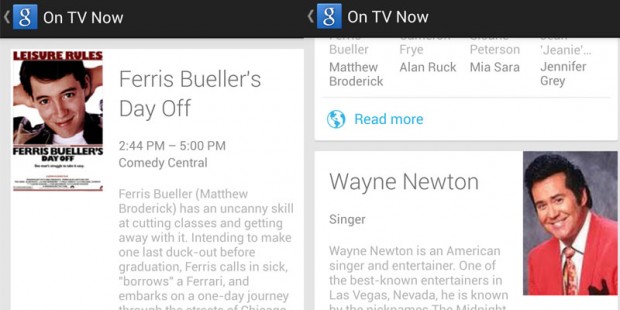 In the example above, I was watching Ferris Bueller’s Day Off, and not only did it give me information about the movie, including all the actors in it, but it also realized that the scene was Ferris singing to Danke Schoen and showed information on Wayne Newton as well. It’s not clear how it knew the song inside a movie was by Wayne Newton. Does it use a prepared list of songs in the movie or actually “recognize” the song? With Google, the people creating a self driving car, you can never rule out anything.

In other tests, when watching talk shows, all the names of famous people that were mentioned were all listed along with the approximate time when they were mentioned (e.g. 4 minutes ago). This is great when people are mentioned on a show and you don’t know who or what they are talking about.

What’s amazing is that they are not only recording every single channel on TV, even premium channels, but that they are able to do real-time recognition comparing your TV sound with every single channel. 20 years ago, this would have been unimaginable, and even 10 years ago would have been hard to believe. It’s not clear if they do voice recognition on feeds from all the channels themselves or use the close caption, but the concept is genius.

Never again will you be watching a TV show and have ANY questions unanswered.