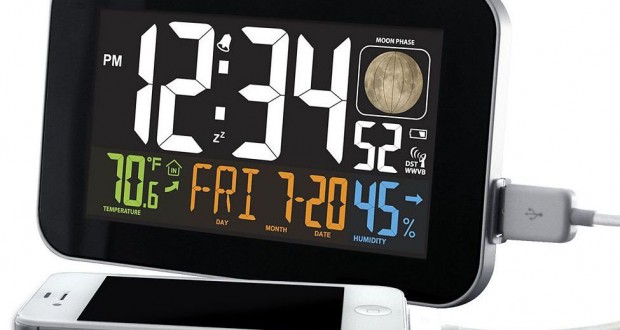 As daylight savings time ends, I’m once again reminded how stupid my alarm clock is because I have to manually set the time back one hour. In this day and age, where everything is connected to the Internet, why do I have to do this twice a year?

With a few Google searches, I discovered that the atomic clock time is being constantly transmitted over long radio waves from Colorado, called the WWVB Atomic Clock time, which can be received in basically all of North America. Although the data comes very slowly, it’s pretty amazing stuff.

After more Google searches, I found the La Crosse Technology website which had a very nice colorful Atomic alarm clock. However, as you can see below, their website does not list the price. Their website lists Fry’s as one of their retailers but the Fry’s website does not show that they have this particular model.

After more searches, I finally found that only Kohl’s had this specific La Crosse alarm clock and that the one near LAX had it in stock. To make things even sweeter, it happened to be on sale for $30, down from $50.

Unlike Best Buy’s online store, Kohl’s does not allow you to buy the item and pick it up at their retail store. Not wanting to miss out on the sale, I decided to visit the store that same weekend.

Since I had never been to any Kohl’s, let alone the one near LAX, I didn’t know what to expect. It sort of looked like a tiny version of Bed Bath and Beyond but also with clothes. I asked one person and he referred me to the information area. From there, they did confirm that they had at least 2 clocks in stock but nobody seemed to know where it was. Interesting that their computerized inventory does not located the item. They did assign someone to walk around and look for the item for me. Surprisingly, there was a wall clock section and a completely separate alarm clock section. Weird.

In any case, I never wanted to come back to this store so I bought 2 clocks, especially since it was on sale. Actually, I saw some clothes that looked good on the mannequins but couldn’t see where to pick up the actual item and I didn’t want to spend another 20 minutes having them walk around with me so I left.

As for the the clock, it’s not as large as my old clock that I got from Radio Shack, but the actual time is displayed in thicker font so it’s easier to see. It takes two AAA batteries for backup and comes with an AC power cable. The first time you turn it on, you will have to set the time and date manually, or you can leave it alone for a few days and eventually, the WWVB time will be read. I’m not positive but it looks like while the time is being set by WWVB, the display will dim, then come back automatically.

As you can see above, it tells you the time (24 hours mode optional), moon phase, temperature, day of week, month, date and humidity. I especially like the temperature display because it gives you the trend with a little arrow if it’s getting hotter. That’s a lot of info on a relatively small screen the size of a large smartphone display.

The display is plenty bright enough to see during the day but the glass shows a little more glare than my old clock. If you are the type of smash your alarm clock to turn it off in the morning, this is probably not the right one to get. It’s fairly thin and would easily fall forward on it’s face.

It also has an USB connector on the side to charge your smartphone (USB cable not included) but unfortunately, that’s all it does. You’d think that maybe it could do a little more with the USB connection but it probably would cost more.

All in all, if you are sick and tired of having to set the time for daylight savings time, and want a high tech looking digital alarm clock, this is a good one to pick. If you need a large wall clock, La Crosse Technology does have other models to choose from on their website.

Update May 2014:
The backlighting on one of my clocks have gone bad and is now unusable.

Update December 2017:
The backlighting on the second clock has also gone bad. Do not buy.