Starting on May 11, Sprint has started to roll out a new version (G925PVPU1AOE2) of the Samsung Galaxy S6 edge firmware to fix “bugs.” I have downloaded it on my S6 edge but it’s impossible to tell if anything is different.

Below are some screen captures of crashes that I’ve had on my Samsung Galaxy S6 edge before the update. However, none of these crashes seem to happen consistently so I don’t know what is causing it and I’m not sure I will be able to tell if the update has fixed any or all of them. 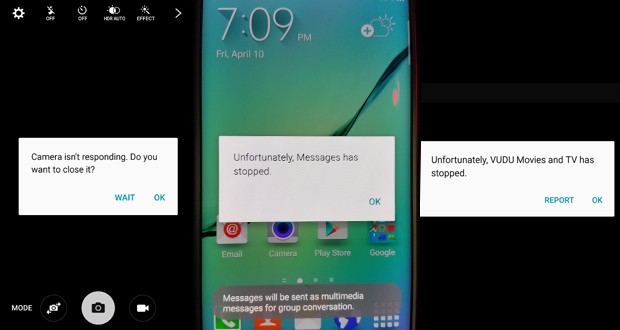 From what I’ve read on some of the Android and Samsung related forums, it appears that Samsung may be putting out a software workaround for the rotation problem. My assumption is that this “fix” will simulate the accelerometer in software to circumvent the hardware problem that is plaguing some of the units. This will make the auto-rotation problem go away but will not fix apps that must use the actual accelerometer information.

If you have a non-working unit, and you are waiting for the software workaround, I highly recommend that you just go and swap your unit or send it in to Samsung for a fix.