Let me start by saying that I’ve had multiple accounts with Godaddy for over a decade and have been happy with the service for the most part. But something happened recently that I must report on. I’m hoping that this is an isolated event and not an indication of systemic deteriorating service.

Recently, my users reported that they were not able to connect to the Godaddy hosted website that keeps track of employees hours. When I looked into it, I found out that because the hosted account was so old, Godaddy had decided unilaterally that they would transfer the website to a new server. This happened at 4pm on a working day. Terrible timing for the users.

This would have been bad enough, but because the database was so large, the migration process crashed and did not complete. I called customer support to report this problem but they told me that I had to wait 24-48 hours to let it finish. I tried to explain that it had crashed but they told me to call back. When I called back 24 hours later, they told me that they would escalate the problem and call me back. They never called me back and I started calling them every 8 hours to try to get something to happen.

Finally, on the 4th call, they verified that the migration had crashed and that they would restart it again. It had already been 3 days of no service. Keep in mind that this website is what was bring used to check-in and check-out employees who needed to get paid for their hours. After the migration restart, it only took a couple of hours for the migration to finish. Of course, now all the DNS addresses and database server information had to be updated. That’s what should have happened the first day.

After updating everything, almost all the websites on the account were working except for the most important one that kept track of the employee hours. After investigating further, I found that only half of the database was copied over to the new server. After more calls to customer service, I was told that the latest backup copy of the database was almost 4 weeks old.

So to summarize, Godaddy decided to unilaterally migrate my account to a new server, without notifying me, and without making a backup copy. Then after failing, restore the data with a 4 week old backup. This is where I lost it. Unfortunately, screaming did not bring back my lost data.

So after all of this horrible service, Godaddy sends me an email giving me a 20% discount for my trouble (See below). Really? That’s your answer to making me have to re-enter 4 weeks of employee work data by hand? Nice job.

After a little cry and getting up from my fetal position on the floor, I decided to use my 20% discount on some SSL certificates that Google now wants all websites to use. As you can see below, when I tried to purchase it, it put 2 copies into my shopping cart. No, I didn’t click twice. Now, I clicked “Remove” on one of the duplicates to get rid of it. 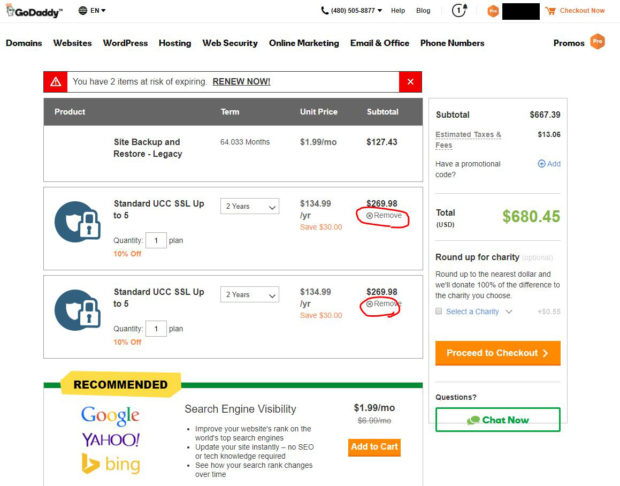 However, as you can see below, when I was paying for my purchase, for some reason, I was only getting a 10% discount on my purchase, instead of 20%. This is the kind of magic trick that other websites pull on their customers but I never thought Godaddy would do this type of crap. Of course, I should have called customer service to correct it, but after spending a week calling them every 8 hours, I was spent. I didn’t have any juice left inside. I let it go. 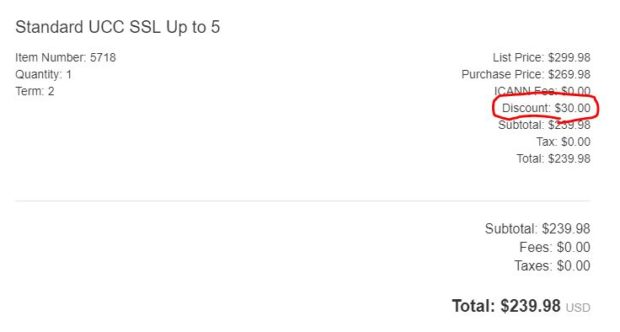 So in the end, Godaddy screwed me without even a kiss.  Then after I was laying on the ground bleeding, they rubbed salt into the open wounds. Then they spat on my face. Then finally, they kicked me in the balls.

After a month, I’m healed and everything is back to normal. And like a battered wife, I’ll stay and take more. At least for now.