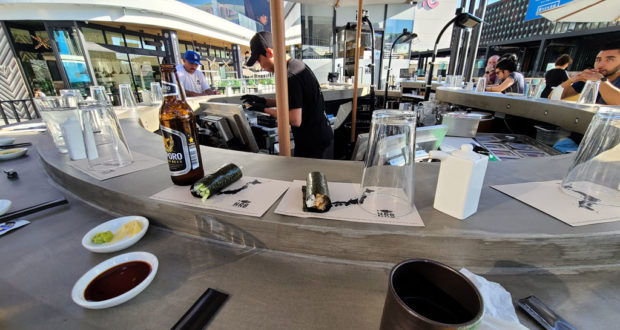 After Sugarfish opened their handroll only bar, Kazunori, it was only a matter of time before other decided to copy it’s format. Enter HRB – The Hand Roll Bar Experience. Their first one was in downtown and now their second one is open in the Westfield Century City Mall.

The pricing is very competitive to Kazunori but since it just opened, the staff still needs some training. This is not dissimilar to what happened to Kazunori so I’m assuming that things will get worked out in a few weeks.

However, there are some very minor differences that are probably not noticeable to the average person. The cucumber in the handroll are not cut as finely as it should and there are no sesame seeds in it. There seems to be a philosophy here that more is better, but as any sushi lover knows that there has to be the correct balance between rice and ingredients.

Also, the nori is not as crisp as it should be and I theorize that this is because of how it is stored outside or even overnight. Also, do not order the cucumber salad. Just about everything is wrong with it. It’s terrible.

A separate problem that this particular branch has cannot easily be fixed. Since it is outside, if it is windy or cold, the eating experience is not optimal. Also, for some reason, the 2 stations where the rolls are made are in the same side of the bar and no stations on the other side. It is also very narrow at one point, and there are items placed exactly in this narrow location making it impossible for more than one person the squeeze through at a time.

Because of the later layout problems, I will not be returning to check to see if the handrolls have improved over time. However, I might check the one in downtown in the future.