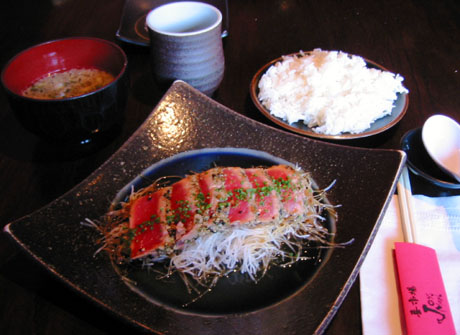 Joy Mart, located in Little Tokyo, is one of those “fusion” slash Asian type places. Nothing wrong with that but don’t expect to find any traditional Japanese plates. The menu I think says sushi, but it’s really Ahi Tuna sashimi ($9.50). Who cares. I ordered it because it’s in ponzu sauce and I love it because of it. You really can’t screw up sashimi that much, since it’s raw afterall.

Although the rice was $2 extra, and the miso soup was $2, the hot tea was free like it should be.  The one other strange thing was they put tempura batter in their miso soup. Now, I’ve seen that in Udon and Soba noodle soup, and I don’t like that, so I certainly didn’t like the fatty tasting miso soup. I like miso soup because it’s light and not heavy. Why would I want fatty tempura batter in it? Oh, yeah. It’s fusion.

Previous: Yamazaki Bakery with Love
Next: Safari Lost in the Jungle