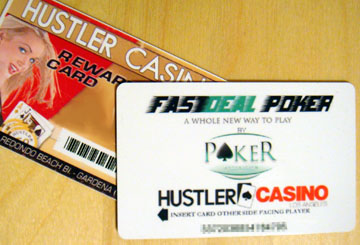 Hustler Casino now has one of those computerized poker tables called “Fastdeal Poker.”

It’s a touch screen kiosk where you enter your name (or any name), your birthdate and a PIN, then put cash into the machine to load up your card.  The kiosk will then print out your name on the card and it pops out of the machine.

Now, you take the card to the computerized table and sit down at one of the 10 seats.  You then swipe your card into the machine and it reads your info and your name comes up on the main large screen at that seat position.  I wanted to take a picture of the table but they wouldn’t let me.

At first, I tried touching the screen with my fingers and it did not work properly.  One of the other players told me to use my card instead and that worked better.  Funny how the kiosk touch screen worked fine with my fingers but not this one at the table.  They should have asked Apple to let them use the iPhone touch screen.

You are given 1,000 chips and I think the blinds started at 25-25, but it may have been 25-50.  The blinds go up every 8 minutes and because most of the players are still trying to figure out how to use the machine, the blinds go up really fast.  I got lucky and doubled up right away on my flush draw.

One of my biggest complaints is the tiny dealer button is hard to find sometimes.  I don’t see why it couldn’t be bigger and even blinking or something.  At least put it closer to the center instead of against the edge.  Also, the table was so high, I could barely see the screen properly.  The next weird thing is, after 2 players are all-in, all the cards come out instantaneously and the results (who won, lost) are shown in less than a second.  Even online poker games don’t do this.

Now, I realize this is called “Fastdeal,” but come now.  Couldn’t we at least enjoy our last moments in the game with some excitement of having a flush draw on the turn?  It was so fast, I didn’t even have time to see what my opponents hand was before it told me I won.  Obviously, the people who wrote this code have never written a good game on any platform or PC.  In fact, with my background, I think I have the expertise to say that whoever designed the user interface was a borderline moron.

By the way, before we started playing, there was a glitch with one of the players screens and they had to reboot the computer.  Each screen (including the main screen in the middle of the table) showed a BIOS screen, followed by a Windows XP screen booting.  That explains why they had to reboot the darned thing.  I’m surprised we didn’t get the blue screen of death in the middle of the game.   I don’t see why they need XP just to run a multi-user game.  I think this whole thing could run on MSDOS or even straight from ROM.

One thing I noticed was that the rebooting process was being controled from off-site.  The floor-lady was talking to somebody on her cell phone and they were doing the rebooting via the Internet.  I’m sure they’re one hacker away from some rigged game coming down on them.

Anyway, once it got to heads-up, suddenly, the game went into slow mode and once we were all-in, would show the turn and river as slow as on some TV shows.  Very strange.  It was so slow, we were joking that maybe it crashed and needed to be rebooted again.  If they’re going to do it this way, why not show the win percentages like on TV?  That would be at least somewhat interesting and something that we don’t get on regular tables.

Well, I managed to win 1st, which was $126 because the one girl wasn’t able to play and the other guy got 2nd, which was $50 something.  I don’t think the whole thing even took 30 minutes.  I’m not sure.  Of course, that’s not including the 3 times of rebooting which may have been like 45 minutes.  After you win, you return to the kiosk and login to your account and follow the instructions to get a printout which you take to the cage to cash.  No ID required.

Between the reboot, bad touch screen, hard to see button, and no exciting turn and river dealing, I don’t see this version of the hardware or software taking over anything anytime soon.  The dealers at the club have nothing to worry about yet.

I know that Commerce also has live games and Sit-N-Go video tables so I’m going to check those out next.  I hope they’re better than this one.