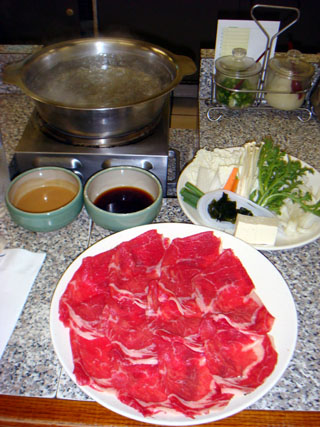 The House that Shabu-Shabu Built

People don’t usually like the words “cheap” and “fast” when referring to restaurants, unless you’re talking about fast food.

Well, how about Shabu-shabu?  Yup.  Fast and cheap Shabu-shabu in Little Tokyo at where else but Shabu-Shabu House.

For those of you that don’t know what it is, basically they bring you uncooked thinkly sliced beef, which you dip in hot boiling water, then dip in sauce and eat.

I know what you’re thinking.  You mean, I have to cook my meal myself and then PAY!?  Yeah, but it’s fun and delish.  Traditionally, shabu-shabu will also come with tofu, vegetables, mushrooms, maybe seaweed, and udon noodles.

In Japanese, “shabu-shabu” literally means “dip-dip.”  In fact, most traditional places will tell you to only dip the meat a couple of times, but I like mine just a little more cooked so I usually Shabu-shabu Shabu-shabu.

If you go to an expensive Shabu-shabu restaurant, it can run you $25 to $40 or even higher, but this one in the Japanese Village Plaza runs you only about $10 out the door (no drinks).  What you see pictured is an order of regular size, and “extra lean,” which you can request.  They also have a non-meat vegetarian plate but I’ve never tried it.  At this place, everyone sits at the counter and you can see the chef cut the meat right in front of you.

One thing that’s great and consistant here are the ponzu and peanut dipping sauces.  Personally, if the dipping sauce doesn’t taste good, I can’t eat Shabu-shabu, even expensive ones.   I guess that’s like their secret formula.

I’ve been going to this place for many years and I have to say that the price has not gone up all that much (or at all) since they opened, but the portions and quality of the vegetable has gone down.  Also, if I remember correctly, they used to give you pickels before and ice coffee after the meal.  All that’s gone now but it’s still a good deal.  However, they kinda treat you like cattle to get you in and out fast because it’s a small place.  But the price is right and the quality is acceptable.

Some people order the large meat plate but if I’m super hungry, I order extra noodles instead to try to keep my girlish figure.

This place is always crowded and they don’t take reservations.  So if you don’t like to wait, you’ll have to come about 20 minutes before they open for dinner, and put your name on the sign-up sheet.  There’s only about 23 seats so if you’re on the list after 23 people, just forget it or wait another 30-45 minutes after they open for wave 2.

Previous: Ooma This!
Next: Hustler’s Fastdeal Poker Too Fast?