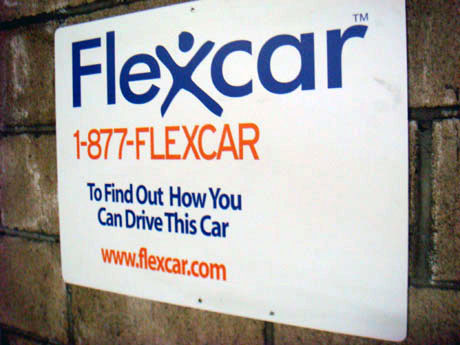 Flexcar.com By The Hour Car Rental

My car was in the shop, so I had to take the bus to go pick it up.  While I was riding the bus, I looked around at all the ads on the bus.  My prediction is they will all be LCD displays with ads in the near future.  It might even be video.  The age of “Blade Runner” is coming my friends.  But I digress.

One of the ads I saw on the bus was for flexcar.com.  It said you can rent a car by the hour so I took a lookie see at their website.  First thing I noticed was that the company had been bought by Steve Case’s company in 2005.  Apparently, he’s collecting companies like I used to collect DVDs.  I like keeping track of what Steve’s doing since he was my classmate in High School (along with Barack Obama).  They’ve done well for themselves, but I’m catching up with this little blog.

Anyway, the way flexcar works is you have to join and be a member ($35 per year in Los Angeles), which allows you to rent a car by the hour ($5 per hour).  Unlike regular rent-a-car places, the cars are parked in public places.  There’s a bunch of them at UCLA and USC.  I guess it’s geared mostly to college students.

It’s not a bad idea and I would have used it when I was in college, but I don’t think I need it now that I own a car.  If I could rent a Porshe for $5 per hour to impress a stripper, I might do that, but the cars are mostly hybrids and some SUVs.  Maybe I could impress some eco-minded stripper.