Downtown is really becoming upgraded by all the action from the Nokia Center and LA Live. Because of all the new commotion, I decided to checkout Katsuya at LA Live in downtown.

They have other branches in Brentwood, Glendale, Hollywood and others opening in Vegas and Miami, according to their website. I’ve never been to any of the other branches so take that into consideration as you read the review of this new branch.

The ambiance here is your usual upscale, hip-fusion Japanese Restaurant that can charge a lot. However, the strange thing was the chairs were cheap plastic chairs that you would have outside for your kids to play on. On top of that, they had tiny tables where they would seat 6 people! The table was so small, at other restaurants, you would seat 2 people and putting 4 would be pushing it. Very strange. 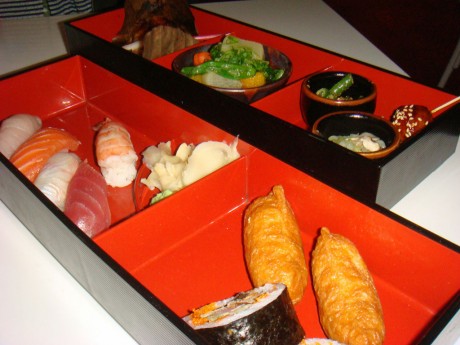 My friend ordered the Sushi Bento because it comes with a futomaki roll, which she loves. Don’t ask. In any case, it also comes with nigiri sushi, miso Cod, sunomono, inari sushi, albacore meatballs. The Futomaki is the huge roll closest to the camera and the inari are the “footballs” you see next to it.  The miso Cod was excellent. Almost as good as the cod at Mori Sushi.

However, the albacore “meatballs” were not edible. I don’t use that phrase lightly. When I say “not edible,” I literally mean it. If I bought it at Ralphs, I would return it for my money back. This should not be served anywhere, especially not at a high priced Japanese Restaurant. 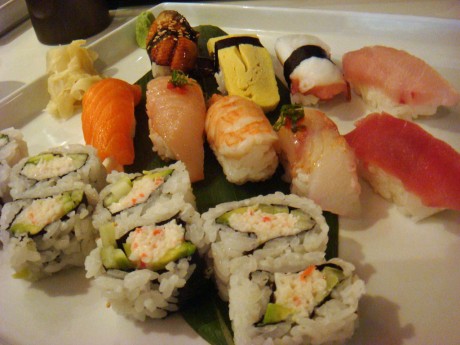 As per my usual technique, I ordered the Sushi sampler which comes with the usual assortment of nigiri sushi: tuna, albacore, yellowtail, salmon, halibut, shrimp, octopus, fresh water eel, and egg, and California roll. As you can even see from the picture, the California roll was falling apart and not properly made. Although everything was fresh, all the sushi showed inexperience in the sushi chef’s technique. I’m pretty sure Mr. Katsuya was not part of the creation of these pieces by any stretch of the imagination. It was more like his intern’s helper made them.

We complained about the horrible “meatball” and the waiter told us that other people have complained about it. I guess it doesn’t matter what their customers say, they are going to serve it no matter what. The waiter also warned us that on busy nights, service is very slow because it is so packed and therefore, the restaurant should be avoided. After seeing the food, no problem. At least we were there early and the service was good.

All this wouldn’t be completely horrible if the price was not so inflated. I guess with the name of the restaurant, and the supposed upscale LA Live location, the over inflated prices are to be expected. To add insult to injury, the green tea is $5 here. Yes. That’s right. No, for one person. And everyone that reads this blog knows that in my opinion, any Japanese Restaurant that charges for green tea is not authentic.

At least they validate your $5 parking at LA Live. It can always be worse. You won’t be seeing me there again.