One of the great features of the Palm Pre on Sprint is the turn-by-turn navigation app. The 3D graphics is done pretty well and it’s just as good as any stand-alone navigation device. In case you’ve never seen it in action, here’s what it looks like when it’s working properly.

But after upgrading the firmware recently, my Sprint Navigation app started giving me this error message shown below. 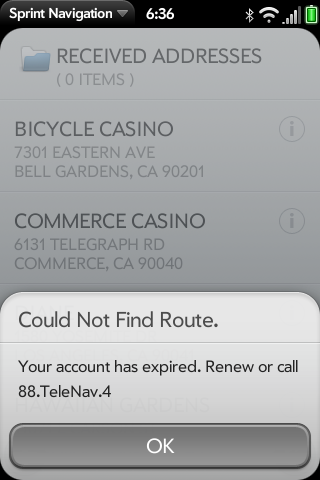 Since the error message seemed to indicate that my account had expired, I called the TeleNav number. TeleNav is the company that provides Sprint with the app. The TeleNav call was very short. They told me that they were aware of this problem, because many other Sprint users were calling about this problem, and that the best thing to do was to have Spring 3 way call them with me on the line and they would talk them through the fix.

Armed with this information, I put a call into Sprint’s technical support. There was a lot of confusion and plenty of waiting on hold while the tech support people checked their manuals and on-screen instructions. I told them that TeleNav had told me to have Sprint do a 3 way call to them. However, the Sprint tech told me that they are not allowed to do this. You can see in my OomaVOIP status that the first call was about 1 hour when I gave up.

After trying a few other things myself by doing some Google searches and experimentation, I gave up again and decided to call Sprint back again for a second call. This time I was determined to get them to do the 3 way call to solve my problem. Unfortunately, Sprint does not have a “reference” number type customer service system and each time you call, you basically have to start from scratch. It took me another 42 minutes to the same point as the last call where they told me that they cannot make the 3 way call.

Frustrated, I asked the Sprint tech if it would help if I went to the Sprint store instead of calling. They told me that the store has less access to my account but that they might be able to make the call to TeleNav for me while I was there.

When I arrive at the Sprint store, there is nobody there. When I say nobody, I mean no customers or workers. It was completely empty. I guess Sprint’s not doing so well.

This situation totally reminds me of how PC hardware and software companies keep telling the user to call the other company.

The only thing I can say is that everyone that I talked to, on the phone and in person, were super friendly and wanted to help me but none of them were allowed to do the one thing I was asking them to do. If the no 3 way calling is really the policy, this needs to be changed. Why can’t the Sprint store tech guy call TeleNav? Very strange.

The bottom line is, my Navigation app still doesn’t work. That was one of the big features that I loved about the move to Sprint because I had to pay monthly on Verizon. But I guess you get what you pay for. Since it’s free on Sprint, there’s no incentive for them to try to fix it for me.

Luckily, Verizon now carries the Palm Pre Plus.  Maybe I’ll be moving back to them again.