Now that the November 9 has been set at the 2010 WSOP, it’s time to reflect on my trip this year.

Compared to 2007, this year’s WSOP was better organized and seemed to be running a lot smoother. I liked that the 1st day wasn’t a marathon 16 hours, and instead was not even 12 hours (including the 90 minute dinner break). This made the experience more enjoyable and I actually had a lot of fun, unlike in 2007.

During my day off from the tournament, I saw an interesting spherical camera device that was hanging above one of the tournament tables. There was an operator (see the guy in the white hat on the left) that was controlling it using what appeared to be game console controllers. The sphere had multiple camera lenses on it, including one at the bottom (see picture above).

I don’t know what this device was but it was not being used at an “important” table so I assume it was some kind of experiment, perhaps by ESPN.

Just like in 2007, I stayed at the Rio for the advantage in the tournament to being closer to it during the breaks. As a matter of fact, I was able to leave the table a couple of minutes before the 20 minute break, get back to my room, order food, go to the bathroom, and still make it back in time. One thing I didn’t know until this year was that I could just ask room service to leave the food in my room even if I wasn’t there in time. This made it a lot easier for me to have my dinner waiting for me in my room.

Something I did this year was to go to the grocery store near the Rio (Food For Less, a few blocks away) and stock up on food to put in the frig in the room. This is a lot cheaper (including the taxi cost) than eating and drinking from the room bar. This was definitely the smart move and I’ll be doing this again next time.

The only thing that was a fail at the Rio was the internet connection, or lack thereof. It was so intermittent, it was basically unusable. I literally spent several hours total over a few days talking to the customer service people for the Internet service.

If that wasn’t bad enough, even the checkout service on the TV was not working properly. As you can see below, I guess the Internet service wasn’t working for the hotel either. 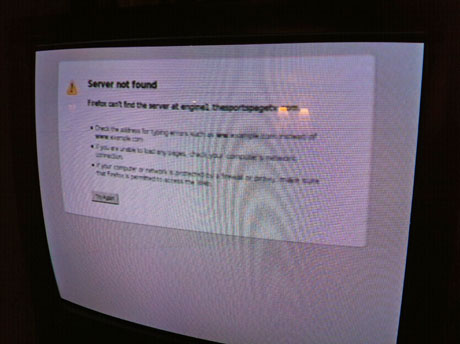 Despite this one glitch, my stay at the Rio was good and I plan on staying there again when I return to the WSOP, hopefully next year.