My Epic Fail at Getting Tires Online

The tires on my old 2004 Toyota basically are bald. It’s time to get new ones. In the past, I’ve used the dealer but I know they charge more. But now that I’m buying everything online, I decided to try buying tires this way and hopefully save some time and money too.

Using google, I found Discount Tire Centers, which apparently has stores all over Southern California.

Their nice website allowed me to pick my tires based on my car, and even make an appointment at their nearest location, which was just down the street from me. Their prices were very competitive too. Nice.

So on the day of my appointment, I arrive at the Discount Tire Center at 1992 S. Sepulveda in West LA, park and go inside. There was nobody behind the counter. Strange. After just a minute, a guy comes out with a customer and they start discussing his options. While this is going on, calls are coming in and this lone employee must answer the calls while trying to help this live customer. I could tell this was going to take a while.

Fast forward to my turn. I show him my appointment print-out and he starts typing into the computer keyboard. I can already tell there’s going to be a problem. He tells me he doesn’t have any record of my appointment but he’ll check to see if he has the tires I need. He then literally calls 2 places on 2 phones simultaneously. One on each ear. Talk about multi-tasking. Unfortunately, this amazing phone trick yields zero tires.

Actually, what’s amazing is what happens next. He tells me that the online appointment system is run by another company and I need to call a guy at that company. With that, he wipes his hands of me and the sales pitch is over. The strange part was not that he wanted me to call some other guy, but that he didn’t try to sell me something. This was a perfect opportunity for him to upsell me to some expensive tires that he has in stock. But no upselling. In fact, no selling at all. It was just bye-bye.  Weird.

So I called the number he gave me and indeed it was the voice mail of the guy that he says the number was for. I explained my situation and left my number for him to call me. It’s been months and I’m still waiting for a call.

At this point, it was apparent that this company didn’t know online from hole in the wall so I was no longer thinking that I was actually going to get tires from this company, but I didn’t want my credit card being charged and wanted to cancel my order.

After getting back home, I went back to their website and found their corporate phone number. Amazingly, I got a live person there without any waiting. I explained my situation and she explained to me that the online service simply emails the local store and it’s up to them to take care of the appointment and ordering of the tires. So apparently, either the local store didn’t get the email or more likely, they don’t know how to read their email.

She was very nice to me on the phone and explained to me not to worry about the credit card because it doesn’t get charged until all the services are completed. She also told me that she would look into the apparent disconnect between their online system and their store.

That’s all nice, but it’s too late for me.

In hindsight, I should have double checked my appointment before going there and I probably could have avoided the problems I had. I still may not have been able to get my tires, but at least I wouldn’t have gone there and wasted my time. I guess the official looking print-out I got from their online website gave me a false sense of entitlement.

On to the next website I go looking for tires. The next one I found was tirerack.com. This one is different in that it just sells the tires to you and ships it to a tire installer near your house. As you can see from the website below, my car can have 2 different sized tires depending on the options I got on my car. 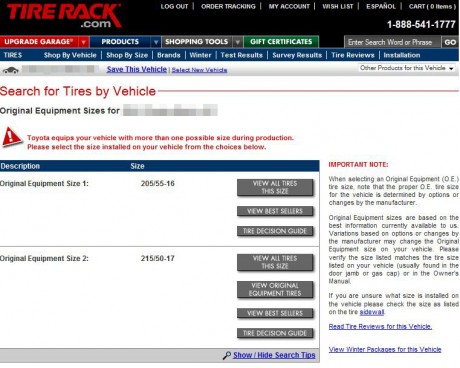 Unfortunately, being the moron that I am, instead of double checking the tire size simply by going to the garage and looking at my tires, I decided that I knew my tire size from memory. You already know where this is going. I went ahead and ordered the tires and had it sent to a Firestone Auto Care center near me. Because Tire Rack is an online company, there is no sales tax so even with the UPS shipping, the cost was basically the same as Discount Tire. Nice.

Unlike Discount Tire Centers, Tire Rack emails me automatically when my tire shipment has arrived at Firestone with their phone number and instructions on what to do next. So far so good. I call Firestone and they tell me the tires have arrived and I schedule an appointment to come in a few days later.

When I arrive at Firestone, unlike at Discount Tire Center, there are 2 people behind the counter, not to mention other people sitting in a waiting area for their cars. This looks much more promising so far. The guy behind the counter goes to the computer and my appointment is actually there. He asks for my key so he can get my odometer reading.

Unfortunately, when he comes back, he gives me the bad news. I’ve ordered the wrong sized tires. He tells me I can send the tires back to Tire Rack and have them ship the right sized ones, or he has the right size in stock but it will cost a little more. Yes! This is the upselling that I was expecting at Discount Tire Center but didn’t get.

At this point in the game, I was happy that he was upselling me and quickly told him to write me up and install those more expensive suckers right on my car.

While waiting for the installation, I called Tire Rack and they said I can either take the tires to UPS, or have UPS pick them up at Firestone, which would cost more. Completely defeated at this point, I told them to have UPS pick it up and I’d be happy to pay extra to end this nightmare purchase.

Finally, after about 2 weeks of online play and false starts, I had my new tires installed at a cost higher than initially expected, not to mention the extra UPS cost I incurred. The guy at Firestone told me there were other things wrong with my car but I ignored him and drove away quickly before he did any more upselling on me.

At this point, you’re thinking this epic fail is over. No it’s not. After a month, I noticed my credit card wasn’t credited with the return of the tires so I called Tirerack and learned that Firestone had sent them the wrong tires. That’s right.

The customer service lady was kind enough to tell me that she would contact Firestone and work this out with them for me. However, she also told me that this could take a while to work out because they will probably dispute the claim. And she wasn’t kidding. In this case, a while may mean forever. It’s been months and I’ve pretty much given up on it.

So in the end, not only did I waste weeks, got frustrated and spent a long time on customer service calls, I ended up spending hundreds of dollars more than if I had just had my dealer put the tires on. What an epic fail this turned out to be.

So what the moral of this story? There are more than one lesson to be learned here.

First, when making an appointment online, do not trust that the system works properly. Double check the appointment by talking to a live person.

Second, don’t be a moron. Double check before ordering online to make sure you are ordering the right thing. Just because the website tells you what to order, doesn’t mean that’s what you should get.

And lastly, sometimes in trying to save a few bucks by ordering online, it may end up costing you more money.

I’m going to take tires off my list of things to order online.