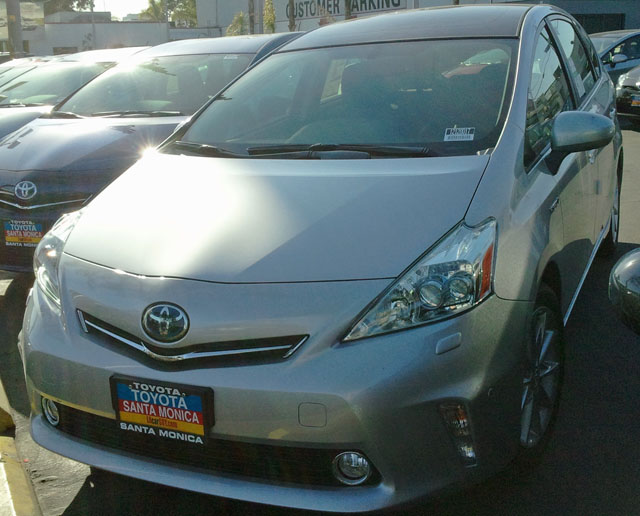 A couple of weeks ago, the Prius V was released to dealers in California. This is the “station wagon” version of the Prius and is bigger. I’m more interested in the Prius C which is supposed to come out in 2012 but I decided to take a look at the “V” to see what I might expect next year.

The Moonroof is basically a sunroof that doesn’t open. Entune is a system where you can download apps to your iPhone, then upload them from your phone to your Nav system. The apps aren’t ready yet apparently so they didn’t have it running in the demo car.  Safety Connect is a rip-off of On-Star, which you get for free for 1 year, then you have to pay per year. Dynamic Radar Cruise Control will automatically slow you down if there’s a car ahead. Pre-Collision tries to reduce the damage to your front end when you crash by stopping earlier.

The Advanced Parking Guidance System is their auto parallel parking computer. There’s a rear camera that shows on the Nav screen including color coded areas for parking. You touch where you want to park and the car does the rest. I assume the car knows if the space is too small to fit in. I noticed that it does know areas where you cannot park and a mesh graphic covers that area so you cannot touch that area for parking. If I had more time, I would have tested it with a small dog blocking the parking space to see if it knows the difference. I think we’re about 10 years away from the car driving itself. That would make my commute time productive and texting would be allowed again.

One other thing I noticed was what looked like a cigarette lighter plug in the back hatch area (behind the rear seats). I’m not sure that’s what it was but that could come in handy for plugging in electrical powered stuff in the back area. You can never have too many power outlets in my book. And yes, there is a USB outlet under the Nav system.

For people who didn’t want to get the hybrid SUV because it was too big, but still wanted more space than the original Prius, this is the perfect solution. For me, it’s too big and defeats the purpose of getting good mileage from a hybrid.