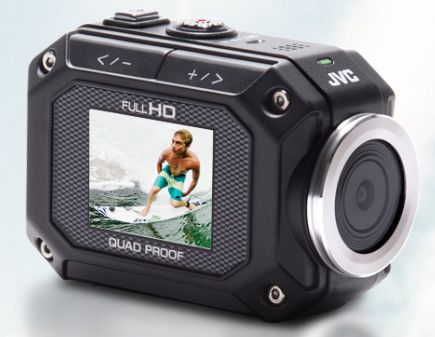 As per their release announcement of the JVC ADIXXION, this action camcorder is now available online and in brick and mortar stores. The MSRP is $349.95 but it’s available on Amazon for $249 with a 16GB Samsung Memory Card from Beach Camera. The online price seems to fluctuate a lot so keep checking the prices before you buy.

Here are the great hardware specs:

Back when JVC first announced this camcorder, I already decided I was going to get one because of all the great features. Some may wonder why I didn’t go for the GoPro which is basically the industry standard and even used by professionals. My 2 main reasons were because you have to get a LCD backing and waterproof casing with the GoPro, both of which are included with the JVC ADIXXION. Less parts equals less to go wrong. Knowing myself, I would put the waterproof case in a drawer somewhere and I would never be able to find it.

As you can see below, the record and power buttons are on top of the unit. And you can see there are very large buttons for the menu and navigation. Because the unit is water proof, it has a rubbery feel to it, which is a good way to prevent dropping it. Note that the unit does not float so if you’re in the ocean and you drop it, it will sink to the bottom.

One thing that’s a little annoying is the large rubbery buttons are sometimes hard to press. In fact, even the record button sometimes doesn’t seem to press correctly. Luckily, it makes a beeping sound so you know when it was pressed properly. I assume this is because it is water proof and the buttons have to be made differently from non-water proof units.

The back opens up to reveal a HDMI and mini USB 2.0 plugs, as well as the battery (see below). Although I did test the USB port, I have not tested the HDMI port. It just seems ridiculous to connect this tiny camcorder to my giant HDTV to watch a video.

The website says you will get recording time of about 1:10 minutes off the battery but I think it’s more like 40 minutes. Your mileage may vary. I did purchase extra batteries from another vendor. More on this next time. 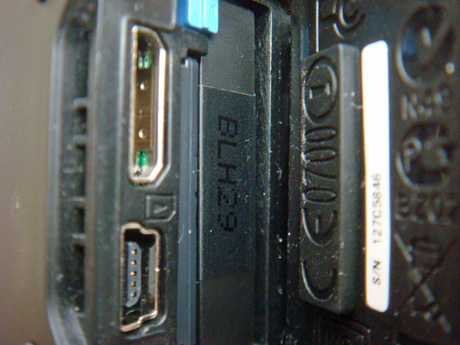 One of the first things you might want to check is to make sure that your firmware is the latest version. You can check it by going to the JVC website and registering your unit there. While there, you can download PDF copies of the user’s manual. The box does not come with printed versions of anything so it’s a good idea to get these. There is a copy of the manual stored inside the camcorder but it may not be the latest version so get it from the website.

When I first got the unit, I was having problems setting up the unit but was able to solve everything by contacting JVC at 800-252-5722. 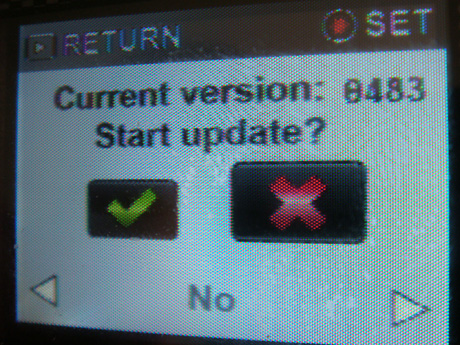 The unit also comes with 2 lens covers which snap on. However, I had a really hard time trying to get it off the lens and when I used a screw driver to try to pry it off, I totally ruined the cover (see below). I’ve yet to figure out the proper way to get the lens cover off so I’m not messing with it any more.

After testing the drop test (by accident) and using it under water, my first impression is good. If you go in and out of water, you’ll hear some strange water sounds, even if rain drops on the camcorder. Sometimes the sound is a little noisy if there’s any wind but not much worse than some regular sized camcorders. If you use it in a Jacuzzi or bathtub, the lens will fog up and you will have to wipe it frequently. 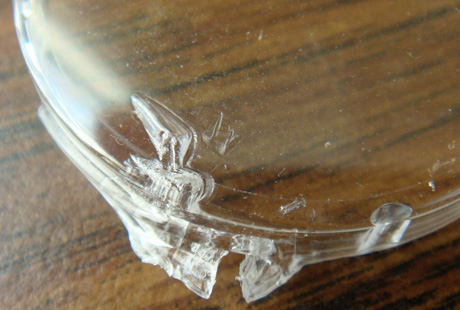 Because the LCD is on the side, it takes a bit of getting used to. The LCD is so small that basically it can only be used to determine the framing when you’re setting up your shot. For me, that’s all I wanted from this tiny unit. You won’t be looking at the LCD for any details during the shoot and you won’t be able to see it from an extreme angle. One interesting feature I like is, if you mount the unit upside down, you can use the settings to flip the image so it’s right side up. This saves you a step in having to do it in post.

The video quality is acceptable for non-pro use. I’m not qualified to determine if the quality is good enough for pro use but it’s definitely good enough for using for a website and in surveillance work. When used in low light conditions, although the video becomes grainy, the unit does adjust nicely and you will get a viewable image. In fact, it works better than many of the more expensive camcorders I’ve owned in the past.

All in all, I’m satisfied with my purchase and my next blog posts will include sample videos (including time lapse), setting up the Wifi and other important features.

Next time: Wifi and Setup