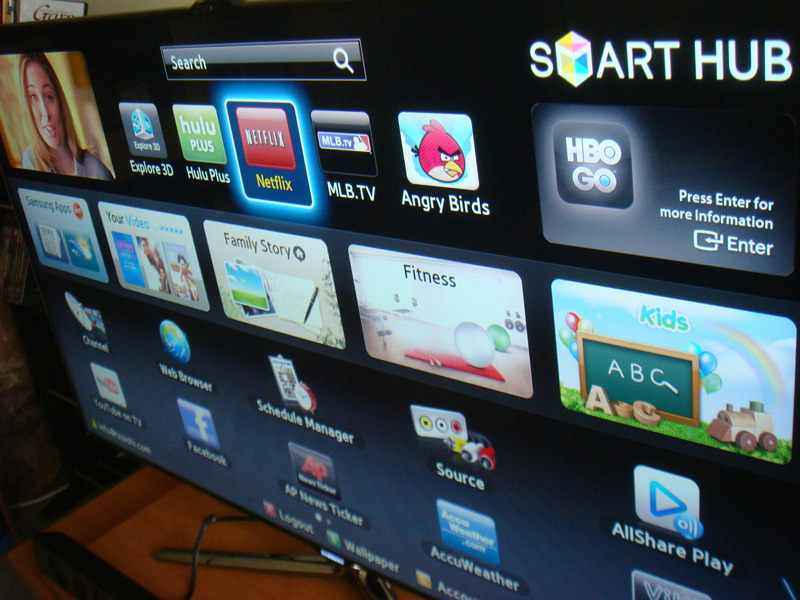 Last time, I reviewed the Samsung 55″ LED 3D HDTV. That Samsung unit, as well as many other units have what they call the Smart TV and Smart Hub running on then. This review will explore the features that this “Smart TV” offers to the user.

Let’s first start with what Samsung calls the “Smart Hub”. This is the screen you get when you press the multi-colored 3D cube on your remote control.

As you can see below, there are 5 “featured” apps at the top: Explore 3D, Hulu Plus, Netflix, MLB.TV and Angry Birds. That’s the good news. The bad news is you cannot delete, or move these icons or replace them with other apps. After testing the 3D, the only app that I will be using is Netflix. I’m tired of Angry Birds and I don’t use Hulu and don’t need Baseball scores being updated like the stock market on my large screen.

The second line also has 5 icons which cannot be changed. The left most one will allow you to download more apps. The others are for sharing pictures, fitness and kids. If I was going to be getting fit, I wouldn’t be watching TV all the time.

Luckily, the apps that are downloaded are shown at the bottom and can be moved, deleted and even put in folders. Unfortunately, some of the built in apps cannot be deleted (e.g. Source, Channel) but can be moved to the end of the list so that they will be on the second page.

Coming from using an iPad, everything about the UI seemed clunky, hard to use, and slow. When you get used to swiping, scrolling is so000 2005.

As mentioned previously, Samsung has their own Smart TV apps that you can download to your HDTV, just like Apple and Google does for their phones. The good news is almost all of them are free.  The bad news is the list is very limited to just the essentials plus some other apps that you’d probably never use. As you can see below, Facebook, Twitter, Youtube, Pandora, Netflix and Hulu Plus are just some of the apps you can download. 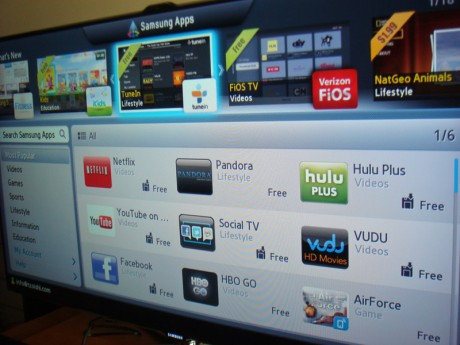 You can also browse the internet using the Samsung browser. I’m not sure who’s browser they are really using but after going to some of the more obvious websites, it seems to work for most of them. However, navigating and typing characters are another issue completely. Don’t even try to navigate using the hand gestures. Even the cursor remote is very hard to use to control the cursor. Typing using the onscreen keyboard reminded me of the frustration of trying to type on my PS3. 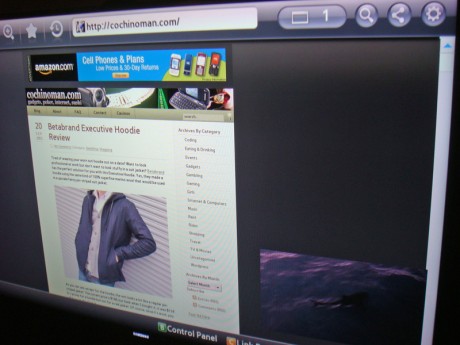 As you can see below, the twitter app display is a little clunky at best, but it does show the information large enough to broadcast on a TV show while the show hosts reads the tweets as they come in. That’s about the only good thing about these massively large tweets. Otherwise, you will have to scroll a lot and is almost useless for people used to seeing a lot of content on their smart phones. 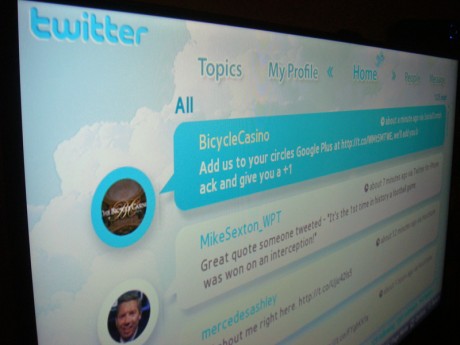 Connecting to Facebook turned out to be a nightmare. I could just give you the executive summary but what would be the fun in that? To use Facebook, first you must go to “Account Management,” (use Yellow “C” button) then “Link to other accounts.” Next select Facebook, then click on “Link.” At this point, enter your Facebook username and password using the on-screen keyboard. Don’t make a mistake or you will have to do this all over again. Once you have entered the correct information, you will get the screen below which indicates you are linked to Facebook.

However, if you have set your Facebook account to verify new devices using your Smartphone, as I did, you will get a text message on your phone with a 6 digit password to enter. If you use this, you will be able to link to your account. If you use your normal password, it will not accept it. 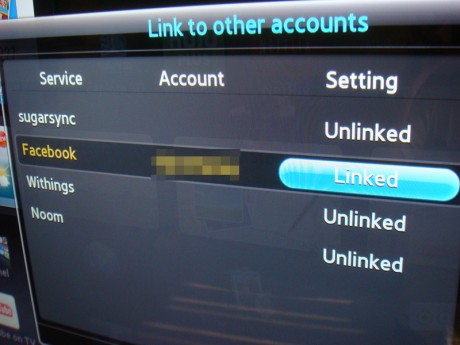 Now, when you launch your Facebook app, you will see the following error. I tried to get this to work myself, then called Samsung customer support at 888-899-7609, who had me reset my TV, and nothing worked. They told me to call their app support number but I decided to hack this myself. 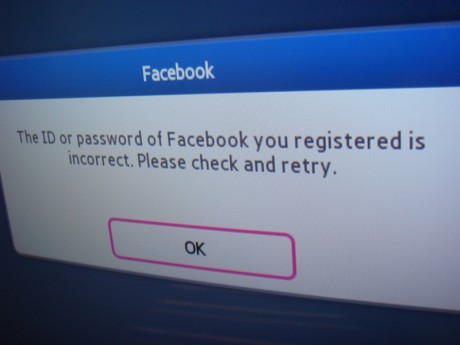 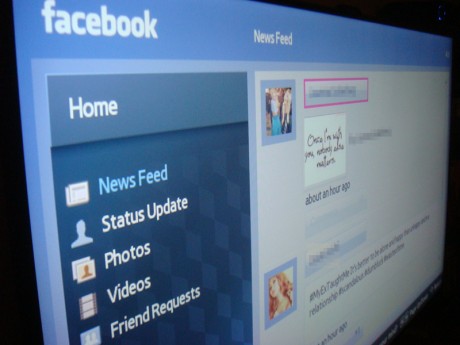 Signing on to Facebook is almost a mute point, however. Unfortunately, as you can see above, the user interface for this app is horrible. You can only see 3 posts at a time and the user interface looks like it’s from the 90’s. When you scroll down, it does not automatically load the next page. As a matter of fact, I was never able to figure out how to load more pages. After all the trouble of getting this to work, I doubt I will be using this app at all unless they upgrade it. No, I think they would have to completely re-write this app to make it useable.

Although there is a Youtube app on the Smart TV, you can also control it via your tablet or smartphone. When you launch the Youtube app, there’s an option to “Pair” with mobile device. This will being up the screen below: 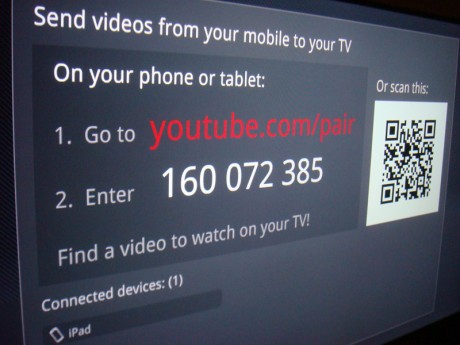 After following the instructions, you will be able to control your Smart TV with your iPad or other similar mobile device. Next, you will see the menu on your iPad as shown below. From there, you can more easily control the Youtube video being shown on your Smart TV from your iPad. If you watch a lot of Youtube videos and would like to see it on the big screen, this is a great feature. 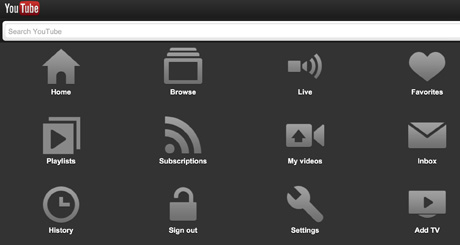 Another free downloadable app from the Samsung store is called “SwipeIt” and you can also download the same app for iPhone/iPad and Android devices. Once you have everything setup, you can browse your mobile device for a picture you want to show on the big screen and swipe up and that image will be then be uploaded and shown on your TV. You can even have multiple devices sending pictures. This is great for parties where you want to show pictures the same way people used to with slide projectors. Unfortunately, boring content cannot be fixed using this new technology. 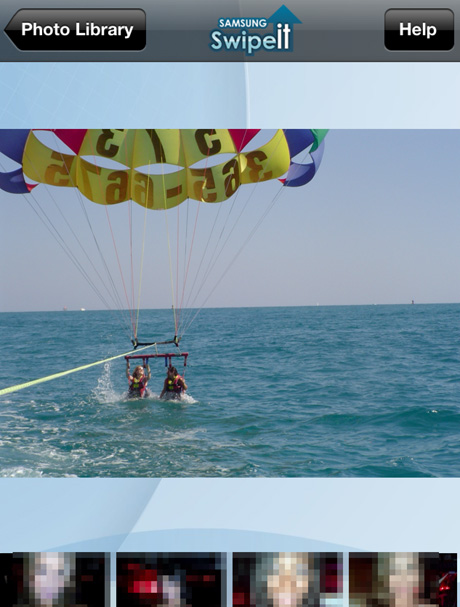 In summary, the streaming apps, especially Netflix is the best feature of this Smart TV. For me, eliminating having to turn on my PS3, just to use Netflix is the killer app. Most of the other features are fluff that I would not normally use.

Many of the more popular apps on mobile devices like Facebook and Twitter are basically unusable. So if you are thinking of getting Smart TV for that, forget it. Many of the other apps, including games are not ready for prime time. Nobody said Samsung was a software company, and it shows.

All in all, Smart TV is not a polished product ready for the mass market. It feels like a beta version that still needs a lot of work. The good news is, it’s firmware and a new version can be downloaded at a later time.

On a final note, Samsung has announced that they will release a new version of Smart TV in 2013, and a preview will be shown at CES 2013 in January. Here’s a picture of what they claim they will have in the new version above.