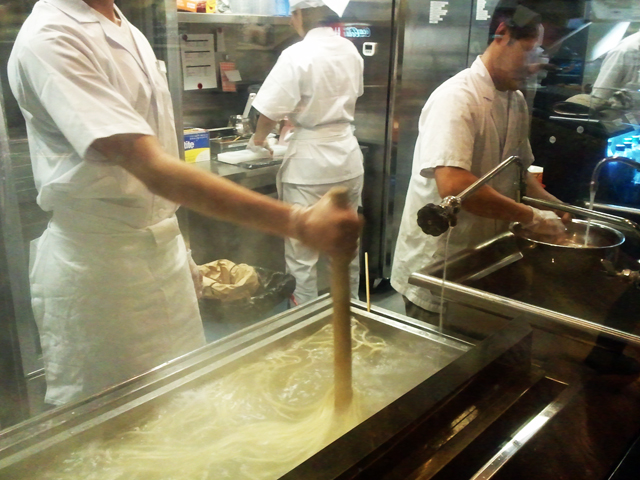 There’s a new Udon place in on the 3rd floor of the Little Tokyo Shopping Mall (or whatever it’s called now) where Sushi Go 55, Shoijin Vegan and Honda Ya are all located. From what I can tell, it’s a chain that’s popular in Japan and have now opened a branch here in Los Angeles.

The concept of the place is sort of like Subway where you pick one of the Udon dishes, then pick your toppings, drinks and other extras. Unlike Subway, all the toppings cost extra, from $1 to $2.50 or so.

As you can see below, just like at Subway, you can watch the people making the Udon right in front of you. When you order, they put the Udon into the bowl and serve it to you in a matter of seconds. The base price of the Udon starts around $4 and goes up depending on the size (regular, large, XL).

The concept is interesting in that they can make noodles so quickly. It must work in Japan or they wouldn’t expand out to the U.S. Keep in mind that it’s not actually opened yet and I visited during their soft opening. With that in mind, there were some problems.

Because everyone was basically being trained, it took the cashier a long time to figure out how to check me out. She missed one of the items on my tray and had to ask her trainer what else was on there. All this will presumably be fixed before the real grand opening. However, she thought I ordered a regular but I had ordered a large. How is the cashier supposed to know what size the customer has? Subway puts stickers on the sandwiches. Maybe they need something like that.

Another problem was the toppings. The tempura items are laying out waiting for somebody to pick them and they were mushy. I’m not sure how this is going to be fixed.

And the final problem was the Udon itself. I feel I’m an Udon expert and in my opinion, it was undercooked slightly. Don’t get me wrong. I’d rather have it undercooked than overcooked. But this was a little too undercooked. A restaurant that only serves Udon must have perfect Udon. Again, this should be worked out by the grand opening. I hope.

Of course I will be back to try it again after the kinks are worked out.