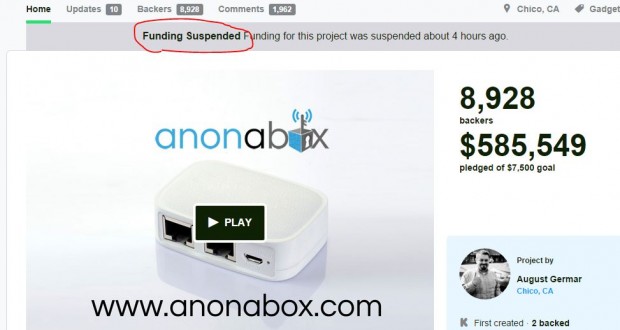 As quickly as Anonabox skyrocketed to over $600,000 in Kickstarter funding, the project has been suspended by Kickstarter.

In case you weren’t following the drama, here’s a little background. Anonabox is, or was a Kickstarter project for a hardware Tor WiFi router that would allow users to simply plug in to their network, then use WiFi to connect to the internet anonymously using Tor. Tor is a non-profit, ex-Government service that anonymizes your internet connection but many novice users find hard to configure and use.

Obviously, the idea must have hit a nerve because in only a few days, the funding grew to over $600,000. However, soon after it got a lot of attention on Wired, people started noticing some questionable claims, if not outright lies. For starters, some claimed that the pictured hardware was an off-the-shelf board that was readily available. Other claimed that the open source firmware was less than up to normal standards, and some even claimed it was fraud.

In the end, Kickstarter determined that the project was violating its policy because of false claims.

The only thing that’s for sure is that there is a market for this type of device. Hopefully, somebody else will do it properly.