Before I start on the S6 review, the first thing you need to do is decide if you want to upgrade from your Samsung Galaxy S5 (or S4) to the new Samsung Galaxy S6 edge. To do this, we will compare the hardware and software with the pros and cons of the new flagship phone from Samsung.

Let’s start by comparing the sizes of the Samsung Galaxy S4 (left below), Galaxy S5 (middle) to the new Samsung Galaxy S6 edge (right). As you can see, the S5 and S6 are the same size and even basically looks the same from above. You can’t really tell in the picture but the display on the S6 is brighter and the resolution is higher (ppi). 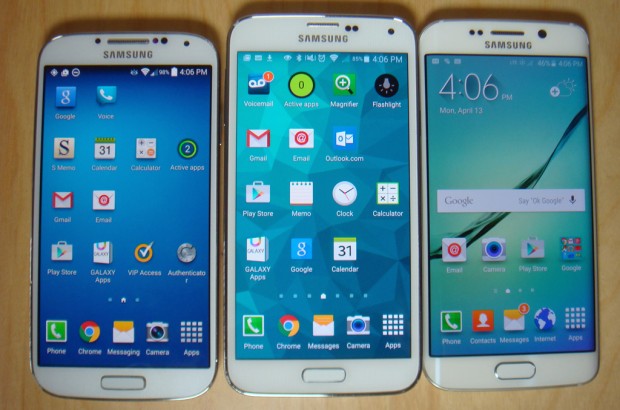 What is noticeable different is the thickness. As you can see below, the S6 (left) is thinner than the S5 (right). Note that the S5’s thickness is increased by the wireless charging back, which the S6 does not need for included wireless charging feature. Also note how the S6 is trying hard to copy the iPhone style with the holes on the bottom for the speaker.

Next, notice that Samsung has moved the power button lower on the S6 (on top of S5 below). This makes it a lot easier for your thumb (or finger) to reach the power button. Finally a great design change from Samsung. 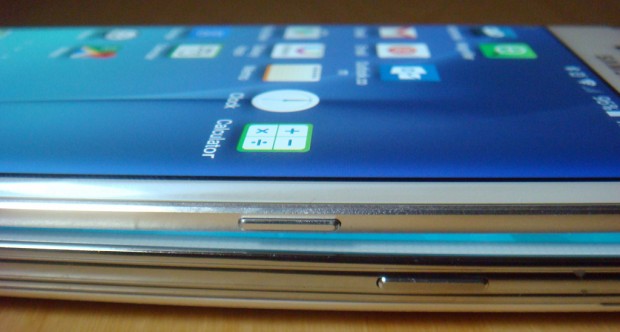 The headphone plug has been moved to the bottom (S6 on top) so there is basically nothing on top. I think the hole shown here is for replacing the SIM card, which requires a special tool that comes with the S6 in the box. 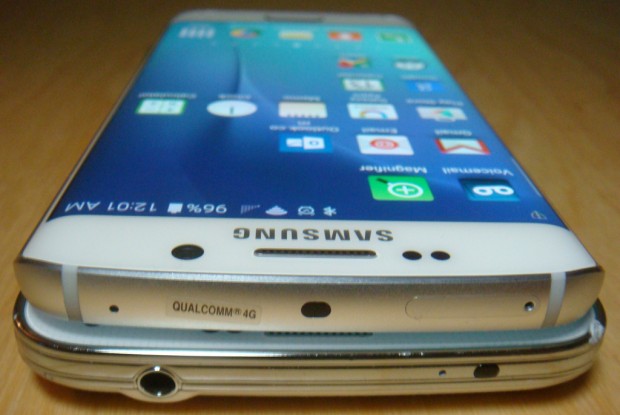 One of the first things I noticed was that there is no way to turn off the touch key lights on the S6. On the S5, the setup screen for “Display” used to have a setting for the touch key (see yellow highlight below left). As you can see on the right S6 display settings screen, that option is now gone. To turn off the touch key, you have to set your phone to “Power Savings” mode which also slows down the CPU among other things. 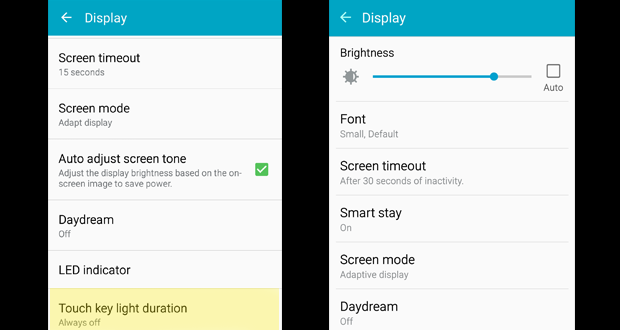 Shown below are the pull down menus for the S5 (top) and S6 (bottom). Other than a slight change in the upper right corner icon arrangement, you can also see that the name of the Wi-Fi connection is shown in the S6 version. If you change Wi-Fi connections a lot, this may be important to you.

The S5’s message app (left) have easily distinguishable text boxes that were different in color. However, there is only one on the S6 (right) that are different in color. All the other options have the same or similar colors. Are the UI designers at Samsung color blind or something? This takes a big step backwards in usability. 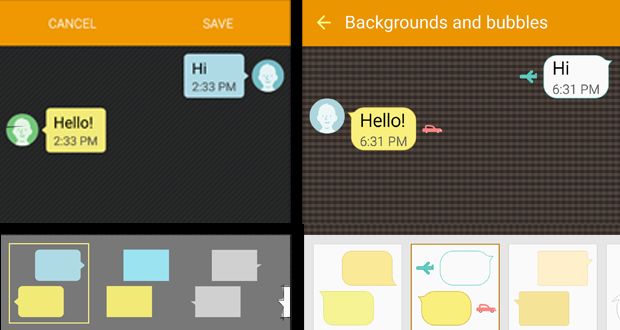 I stay away from water so I’ve never had my smartphone get wet. The 32Gb internal memory is plenty enough for me. However, I have run out of power on my new S6 and have also gone to sleep without charging my S6 and wished I could just swap out the battery like my old S5. I can no longer laugh at iPhone users panicking with dead batteries. The back of the S6 is glass so I’ve had it slide off my jacket, then off the table 3 times. Luckily, it has not broken anything yet.

If you have the old S4, it’s a no-brainer to upgrade to the S6. If you have the S5 and you always run out of power and have to swap batteries, the S6 may not be for you. Carrying a spare S5 battery is a lot easier than carrying a charging battery pack for your S6. This should be your deciding factor on upgrading from the S5 to the S6.

For me, I can just make it to the end of the day with my S6 with low to moderate use. If I have to use it a lot, I end up having to charge it at work.

Lastly, don’t buy the S6 edge for the “edge” features (notifications on the edge, night clock, color coded caller ID) because frankly I don’t use any of these “edge” features. If you want to spend an extra $100 for the cool edge look, do it for that reason, like I did. But if you are thrifty and don’t like to pay for looks, just get the regular S6.