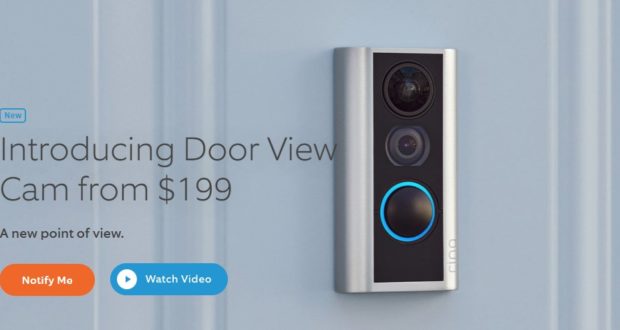 Ring is best known for their doorbell camera, promoted on “Shark Tank,” and now owned by Amazon. Now they are ready to introduce a door camera that replaces your door peephole. Ring is not the first one to think this is a great idea.

Back in 2015, Peeple had this same idea and I bought it to try out. There were 2 main problems with it: The battery didn’t last very long and you could not look through the actual peephole without removing the device from the door or looking at your smartphone. It was a deal breaker for me and I stopped using it shortly after I installed it.

So for literally 4 years, I’ve been waiting for a better solution. There was another company that had a camera that mounted above the door but I could tell this was not going to work very well. Finally, at CES this year, Ring showed off a peephole camera which would be released in 2019. And as promised, their website is showing it off.

It has all the same features as their doorbell cameras plus the added feature of being installed over your existing peephole. Checkout their promo video below. So I will be in line to get one for $199 and will do a full review shortly after that.

2019-04-26
cochinoman
Previous: Add Fun Skills to Your Amazon Alexa
Next: Why DirecTV Now Lost 20% of Their Subscribers