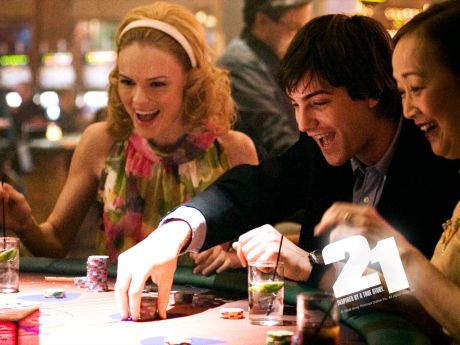 The movie “21” is based on the book, “Bringing Down the House,” by Ben Mezrich. The book is based on the events of the re-generated MIT blackjack team in the late 90’s and Jeff Ma’s experiences. Although I’ve not read the book, reports are that the movie basically changes everything except a few specific scenes.

First off, let me start by saying that I used to count cards in the 80’s but found it too much work. Meaning my brain power wasn’t good enough to do it for 12 hours straight. I’m still an avid gambler and play poker a lot. Generally, I love casino and gambling movies,  I loved “Rainman,” “Casino,” and of course, “Rounders.”

As for “21,” other than the correct explaination of how to use simple counting techniques for blackjack play, almost everything else seemed inaccurate or completely wrong to me.

For example, the team stayed at Hard Rock and were seen all going to the same suite. Then, they played at the Hard Rock casino. No blackjack team would ever do this, and certainly not the famed MIT team. They are seen together too often and too many times.  They know the casino has cameras everywhere.

There are several scenes where the movie teaches how simple counting is done.  I say “simple” because there are more complicated techniques.  My friend that I watched the movie with didn’t understand this section of the movie and I had to explain it more in detail to her after the movie.  So I’m not sure if this part of the movie was useful to anybody since it’s apparently too difficult to understand for the untrained, but boring for blackjack counters.  It’s hard to balance things like this in a movie.

They also used typical signals to communicate with each other.  However, they used the same cross arm signals throughout the entire trip, and even on subsequent trips.  Good for audiences to understand what’s going on.  Bad for presenting reality.

Also, there’s another scene where the “whale” splits 10s.  I could be wrong but I think even if the count was very high, splitting 10s is a sure signal to the dealer that you are counting cards.

To illustrate, I was playing at the Riviera, back in the 80’s. It was a multi-deck shoe, and I was playing by myself at the table. I had been playing for a while, doing nothing too strange and winning good money. At one point, the count became abnormally large and I switched from betting $5 per hand to two hands for $50 each. I kept winning and I increased my bets to $150 each. Before the count got back down too low, the pit boss came over and told the dealer to re-shuffle.  They noticed me out of all the players in less than 15 minutes.

Instead of getting up, and basically admitting to counting, I decided to risk losing some money back in order to prevent them from tagging me. I stayed and kept playing, lowering my bets only down to $50. By pure luck, I started on a long winning streak at this point, so I raised my bets back up to two hands at $150 again. This time, the pit boss came over and changed the dealer. To make a long story short, they changed dealers one more time on me before I left with about $10,000. The pit boss stood next to the table the entire time I played.

Remember that this was back in the 80’s when they really did beat up counters and cheats. The movie apparently takes place in present time since they were talking about face recognition software. If so, I doubt any large corporation would be using tactics like beating people up anymore. You could argue that the security consultant did this on his own but it’s still a big risk for everyone including the casino.

On yet another occasion in Vegas, I was at the end of a long session and I was so tired, I thought I had a hard 16 against a face card and hit. Before I realized what I did, the dealer brought out a 4. I had accidentally hit on a hard 17 and made 21 with the 4. The dealer immediately called over the pit boss. He looked and told the dealer to keep dealing but watched me play for a few minutes.

These examples show how paranoid the casinos were, (and still are) about cheats and counters alike. I wasn’t even playing with $10,000 chips or anything crazy like in the “21” movie and they kept checking up on me. This is why what happens in the movie is totally fiction. If they did what they did in the movie, they would have had the casino watching over them like hawks. No way, they could get away with it. I’m sure the book is very different from this fictionalized version in the movie.

Enough mathmatics and gambling. What about sex. Well, other than a unrealistic romance between the protagonist and one of the female counters, their meeting place is a strip club. So as you can imagine, there are the required lap dance and pole dancing sequences. It’s not as nasty as I like, but it’s there. Let’s face it. This is a gambler’s movie. Not a horn dog movie.

All in all, there’s a lot of special effects showing the cards close up with sound effects making the cards sound like rocket ships. As gambling movies go, it’s not too bad. It’s not as good as the Vegas scenes from “Rainman,” but it’s okay. When the dealer peels off yet another card to make 21, while all the players are shouting for “Monkey,” a picture card, your heart will pump a little harder if you’re any type of real backjack player.

Summary
So what’s the bottom line?  If you’re a gambler but can’t leave town and you need your Vegas fix, this might be one option.  Otherwise just wait for the DVD or Blu-ray.