Smart Fortwo is Small But Safe

In the last month or so, I’ve been seeing these almost golf cart sized “cars” on the road.  I assumed they were electric cars but didn’t know what it was.  I finally got curious enough to google it and found the company called “Smart” and their car is the “Fortwo.”

It turns out that it’s not electric but does get good mileage.  The company is a joint Venture between Mercedes-Benz and Swatch (yes, the watch maker), and it’s been out in Europe but only recently (1/2008) in the US.  Because of the Mercedes engineering, they’ve put a lot of work into safety, including 4 standard airbags (2 front, 2 side).

According to the website, they have 3 models available in the US.  The basic stripped version sells for $11,590 and just comes with the naked car.  Their middle model called “Passion Coupe” sells for $13,590 and includes air conditioning, panorama roof, and power windows (and some other stuff). Their top model is their Cabriolet, and basically is their Coupe plus a soft top for $16,590. 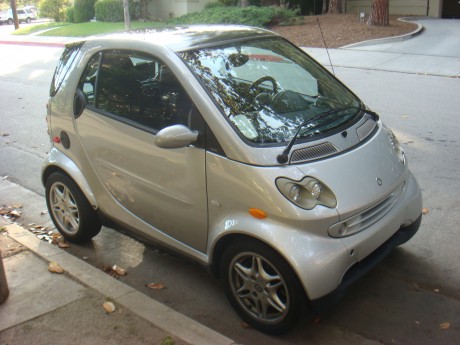 Other interesting specs are:

A lot of people are probably going to be concerned about safety so their website really has a lot dealing with this issue.  One of their big features is:

“The tridion safety cell is a “hard shell” that surrounds the smart fortwo’s occupants with an energy displacing system of longitudinal and transverse structural members. Then the engineering team added Electronic Stability Control (esp) and ABS brakes to make the smart even more technologically advanced.”

They have a video on the website showing an offset head-on collision between the Smart and a Mercedes, shown in slow motion from different angles.  The Smart’s tridion safety cell does seem to do what’s it’s supposed to do.

When I owned my MG Midget, one of the biggest problems I had was bus and truck drivers forgetting that I was in front of them at the stop light and almost rear ending me when the light went green.  However, part of that problem was how low the MG was.  The Smart car is not that low.  In fact, their seat is higher than normal, partly for higher visibility, but also for side collisions (as explained on their website).

The price seems perfect for High School and College kids and the safety features may help parents feel more comfortable with their newbie drivers going on the streets.  The middle model has a MP3 (read iPod) input for their stereo system. It’s clear that their demo-market is head-to-head against Toyota’s Scion.

It’s small, but “smart.”  If I get a chance to drive one of these, I’ll report back.