After getting my JVC ADIXXION, I quickly realized that I needed more batteries and a wall charger/car charger. After browsing, I cound the Wasabi Power adapter on Amazon for $19.99 sold by Blue Nook. Yes, a lot of middlemen in this deal.

As you can see below, you get a wall charger with a car charger cable that will also let you plug the wall charger into the cigarette adapter in your car. You also get 2 JVC ADDIXXION compatible batteries made by Wasabi.

As you can see, there are 2 sets of prongs in the charger but the battery only has one set. I thought they had sent me the wrong charger so I called Blue Nook at 877-268-1235 and Terry in customer support was super helpful and explained to me that the battery goes in flush to the right side and only uses the prongs on the right. Sure enough, it worked as advertised. Might have saved everybody some time if the unit came with some instructions. 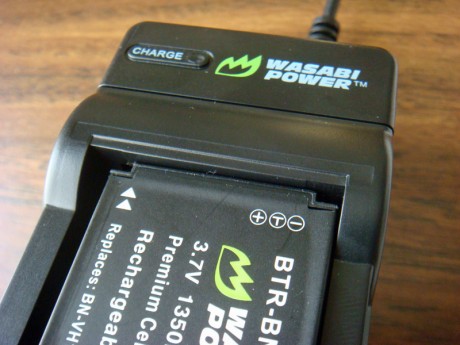 The batteries appear to be microscopically larger than the actual JVC battery because it’s a tiny bit harder to keep inside the camcorder. It keeps popping out but I did manage to get it to stay in. It’s hard to tell but the battery seems to last about the same amount of time as the regular JVC version.

But for $20, it’s a fair deal and at least I have 2 more batteries for my ADDIXXION that will allow me to use it for almost 2 more extra hours on top of the regular amount of time.