Although I’m still using my ancient JVC Everio for HD video, I had to stop using my Digi-Slave Ring Light because it reduces the amount of area provided by the Raynox wide angle lens.

So I decided to look around for a light that goes on top of the camcorder instead of around the lens. Last time I was at the Sony store in Century City, I saw a great LED light that mounds on top. The Sony store online has it on sale for $220 as shown below.

Even at $220, it seemed like a lot of money for a matrix of LEDs so I kept looking. On Amazon, I found a very similar LED light by Neewer for only $40 as shown below. This unit has the same features as the Sony with a dimmer, filters, and can use AA batteries or Sony camcorder batteries. In fact, this Chinese knockoff light seems to be exactly that. 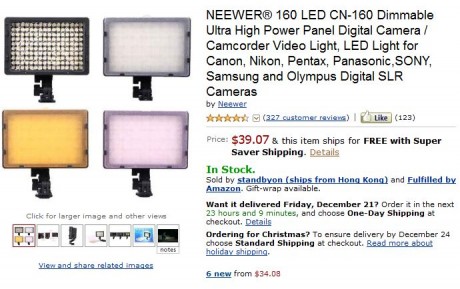 Amazon also recommended that I buy a Sony NPF550 battery (from Eforcity $7.88+tax ) and charger (from DavisMAX $4.56). Both are knockoffs and not Sony factory units. The battery I got from Eforcity worked but unfortunately, the charger from DavisMAX was the wrong one. I called them and although they insisted they sent the right charger, they told me I can keep the unit and they refunded my $4.56.

After all this regurgitation, I found a better deal at Amazon from Best Stop Electronics which was the correct charger + 2 SONY InfoLithium L NP-F550 batteries for $14.19+S&H. This one worked perfectly with my Neewer light and the charger was correct as well.

First of all, from the box, to the “instructions” to the lighting unit itself, everything about this product looks and feels cheap. It’s one of those things that you feel you have to be careful with because you think the battery door will break if you don’t use it gingerly.

Having said that, the light does work as advertised, and the filters do make the video have a nice warmer look than without it. The brightness of the LEDs can go from barely noticeable to so bright that you cannot keep your eyes open. 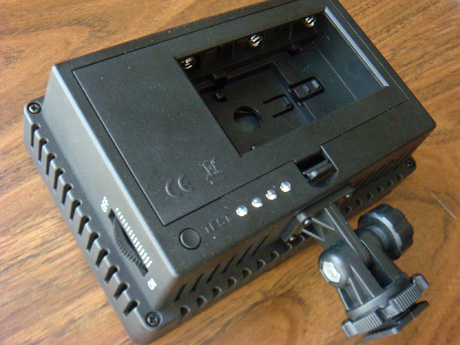 Before I charged my camcorder batteries, I tried the unit with AA batteries and it does work. It took me a few minutes to figure out how they go into the unit but they do fit. However, I highly recommend you use the rechargeable camcorder batteries instead. They fit nicely and work perfectly and last longer than the camcorder itself.

There is also a battery test LED on the back that shows the strength of the battery but it’s just as easy to just turn on the light to see if it’s working. One strange thing I noticed was that if you leave the battery in the unit, it will eventually drain all the power from it, even if it’s turned off the entire time. So you will have to take the battery out when not in use.

All in all, for the price, this unit is a great addition to your indoor camcorder recording bag of tricks. Even in natural light conditions, you can use this light to light the subject a little better and improve your image and can be used all the time, in indoor and outdoor situations.