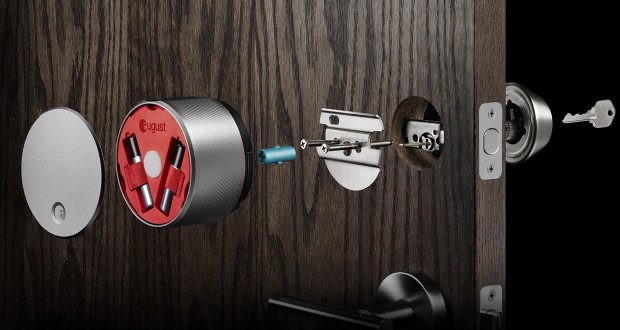 Since it’s announcement back in 2013, I’ve tested and rejected another smart lock called Lockitron, and have waited patiently for this sexier looking August smart lock. Although they started shipping units last year, and started selling them in Apple stores, I waited for my pre-order which was only $199 instead of the full $249.95 retail price.

The August smart lock, comes with 3 mounting plates and 3 adaptors as shown below. The box comes with a compatibility chart that will show you which plate and adaptor to use for your make of deadbolt lock. The August website has an installation video that explains how to install everything. You will need a screw driver to remove the back (inside) part of the lock and install the mounting plate.

Next, using the peculiar looking wing latches that come out of the main locking unit, mount it onto the mounting plate. It will look something like what you see below, with the faceplate off. You can’t see them all here but there are 4 AA batteries that goes into the lock. Once you remove the battery tab, the unit will power on automatically. 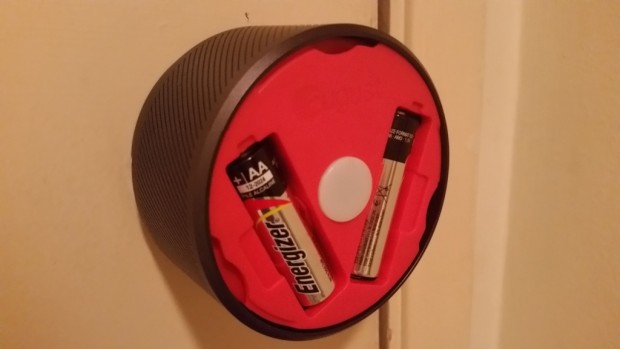 Next, download the Android or iOS app to your phone, then launch it and follow the instructions. You will be asked to create an account using your email and phone number, both of which will have to be verified. Then, the phone will automatically search and connect to the August via bluetooth. Although this takes a few minutes, amazingly, there is no human intervention during this connection. Unlike all my other bluetooth devices that I have, this happens completely automatically.

Next, you can change your lock settings as shown on the left screen image below. Notice that in the Android version, there is currently no “auto-unlock” feature yet. If “Everlock” is turned on, the August is supposed to automatically lock. However, it is on a timer and does not know if the door is closed or open and simply locks the deadbolt. I’m sure it’s too late for this hardware generation, but somehow the lock needs to know when the door is closed before locking. 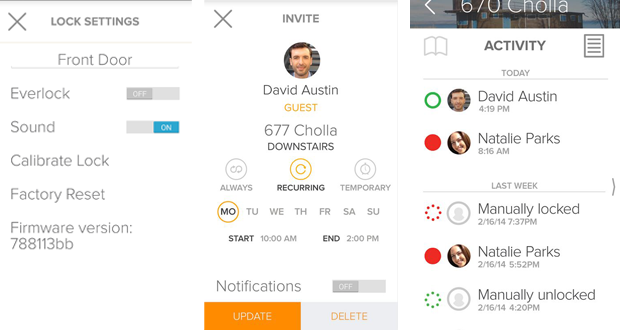 The middle screen image above shows how you can give guests the ability to unlock the deadbolt during specific days and times. This would come in handy for repair or cleaning people to enter. You can also temporarily give your friend or guest entry, then remove them from the list.

Another great feature is the activity log which will tell you when people unlocked or locked the deadbolt. However, the Android version does not keep track of the manual locking. Also, unlike Lockitron, which was connected via WiFi, it will not report immediately when the door was unlocked. August has just announced a new product called August Connect ($50) that will connect the smart lock to the Internet via WiFi, which will then allow it to have this feature. This new product will also allow you to open the lock from anywhere via smartphone. August Connect will be available in February and will make it have the same features as Lockitron.

It’s only been a few weeks since I’ve installed August so I cannot report on how long the battery lasts with nominal use. I will report back here when I’ve used it longer.

As far as using your smart phone to unlock the lock, it takes as long or longer for the smart lock to recognize the smart phone before unlocking. It ‘s still faster to use your key. The only time that it might come in handy is if your hands are full and you cannot reach into your pocket for your keys.

If every single door and lock could be unlocked with my smart phone, I could stop carrying my key set. But of course, this is not going to happen any time soon. So, I still have to carry my key set. August does not save me any time, but it does do something my keys cannot do, which is to temporarily allow entry without having to give out copies of my keys.

All in all, this smart lock is better designed and looks better than Lockitron, but I’m not sure if I really need it. For people who have a lot of people visiting, or community rooms that are shared, this might be the perfect solution. For me personally, I don’t think I will be using it much. It’s back to my old keys again.

Update September 14, 2015:
The batteries that came with the unit finally became low enough that the app told me to replace the battery. So they lasted approximately 9 months with very little use (6-8 times a month). Don’t expect to get anything this long if you use it several times a day.

August Smart Lock Review
Since it's announcement back in 2013, I've tested and rejected another smart lock called Lockitron, and have waited patiently for this sexier looking August smart lock. Although they started shipping units last year, and started selling them in Apple stores, I waited for my pre-order which was only $199 instead of the full $249.95 retail price. The August smart lock, comes with 3 mounting plates and 3 adaptors as shown below. The box comes with a compatibility chart that will show you which plate and adaptor to use for your make of deadbolt lock. The August website has an installation&hellip;

Summary : Sometimes takes a while to unlock the door but works as advertised. If you need the features that a smart lock offers, this is a better one to than Lockitron. If you need it to be WiFi connected, you will have to buy the August Connect for $50 more.