After using the S6 edge for about 6 months, I’m finally ready to do a real-world usage review of it. If you’re still trying to figure out if you should upgrade your older Samsung, read my comparison review first.

The best thing about the S6 is the camera. Not only does it launch in about a second with a double click of the home button, it’s also better than any competing smartphones that I’ve checked, especially the real time HDR.

As you can see below, you can change the setting for both the rear (below left) and front (below middle) cameras. However, if you use video stabilization, this will limit some of the video resolutions you can use. Instead of pre-loading all of the crazy camera modes and filters, Samsung now allows you to download just the ones you want (below right). This is a great idea. 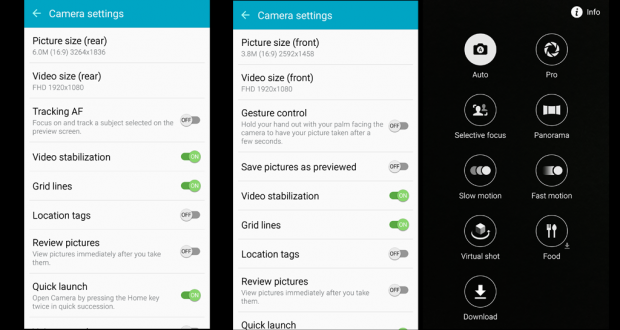 When you click on the volume control button, you will see just the ringtone control. If you touch the gear icon, you will see all the volume controls (below left) which can separately be changed. Something else that I like is in the settings under battery, you can see a graph of how much power you are using with an estimate of how much time you have (below middle). Once you get low, you can also use ultra power savings mode to survive a little longer.

One new change that I hate is the way the desktop no longer wraps around when you scroll to the last one (below right). With the older version on the S5, when you scrolled to the last one and kept going, it would scroll to the first one. This is no longer available. To make matters worse, you used to be able to skip to the one you want by touching the dot icons on the bottom. Now, this no longer works. Why did they change this?

Next, Samsung has decided to make the wireless charging pad round instead of the rectangular one for the S4/S5. Although it looks cooler, it’s actually harder to make sure to center it so that the S6 charges correctly. Sometimes cooler isn’t better. 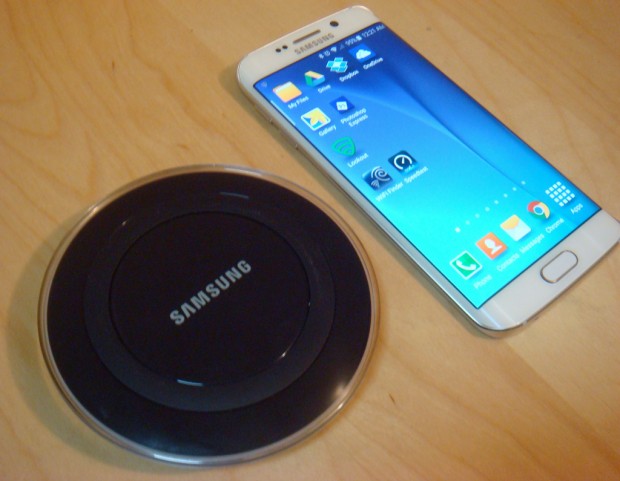 What is cooler is the blue LED lighting on the front of the charger. The LED actually indicates charging and when the phone battery is fully charged, the LED will first turn green, then turn off.  However, if you place the phone vertically, the LED area is covered by the phone. In the picture below, I turned the phone to the side so you can see it. I guess they are expecting you to place your phone side-ways so you can read the edge notifications. More on that later. 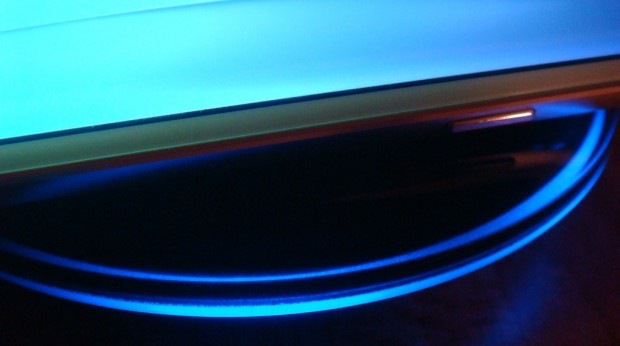 While we’re on the subject of wireless charging, you will be able to charge your phone at any participating Starbucks (see below) just by placing your phone on the powermat on the table.  So no need to bring your charging cable to Starbucks. 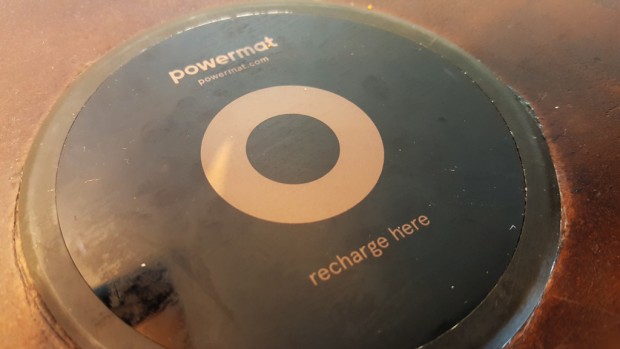 Speaking of charging cables, the S6 comes with a fast charger that can fully charge your phone in about an hour or so and give you about 4 hours of charge in about 10 minutes or so. That makes the non-removable battery less troublesome but 10 minutes is still more than 10 seconds to swap batteries.

After using it for months, I’ve noticed that this is the only Samsung phone I’ve ever owned where people, even strangers ask to look at it, including iPhone owners. Yes, the “edge” screen is sexy but otherwise useless. I don’t put the phone face down or use the side clock while sleeping. Apparently, Samsung is doubling down on it and possibly curving the top too on the new S7 edge.

One good news for me is, although a little loose, the S6 edge still fits in my Waterfield Smart case that I’m still using. Hopefully, the S7 will fit as well, if I decide to get it.

With the fast charging, I’ve not had a dead phone yet with moderate use. But watching streaming video drains the battery so it needs to be plugged in for long viewings. It also gets pretty hot. The lack of a microSD slot has not been an issue so far, but I don’t keep my entire photo collection on my phone. But most of all, I love the camera: The quick launch, live HDR, resolution, downloadable settings. All of it.

All in all, I’m happy with the generation of the Galaxy. It’s fast and sexy. Just the way I like my phones.