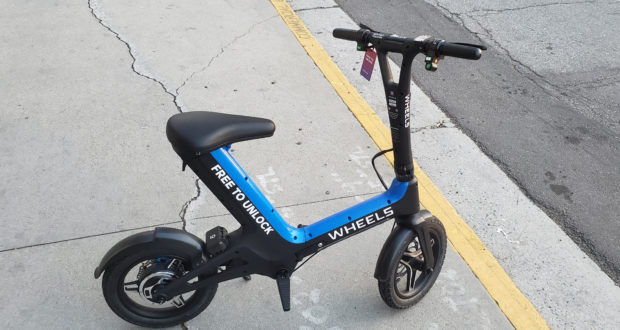 Wheels E-Bike Rolls Out In LA

E-Scooter companies seem to be exploding with the likes of Uber Jump, Lyft, Lime and Bird all trying to get your last mile rides. Now comes something slightly different from a company in West Hollywood started by the people from Wag called Wheels.

Instead of using an e-scooter that you have to stand on, they are using an E-Bike which allows the rider to sit down low to the ground. Unlike Uber’s Jump E-Bike, there are no pedals. As you can see from the picture above, it looks like a tiny bike with very small wheels.

The E-Bike is manufactured by a Chinese company called i-Walk but apparently, Wheels has some type of exclusive deal with them because their website no longer shows this product on sale. However, you can still go to the product’s page directly here.

According to i-Walk, the bike will go up to 30 km/h, can connect to your bluetooth on your phone to output music, charge your phone, and has swappable batteries. It also has front and rear brakes (see picture below) which feels safer than the wonky brakes on the E-scooters where you literally push your foot on the rear wheel.

To use the service, you download the app via the Wheels website. Once done, you will go to the main screen which will show you where their bikes are located (see left below). Go there and scan the code on the right side of the handle bar (see above) and you will get the middle screen below. Next, you have to push the green power button on the right side of the handle bar. Also, be sure to turn on your bluetooth on your phone.

If you press “Start Ride” without pressing the button, you will get the error message shown on the right image below.

You can try again and once you have connected, you will get the screen on the left below that tells you that you can play your music if you want. I didn’t try it so I’m not sure if that feature works or not.

When you are finished with your ride, press “End Ride” and you will see the “Locking…” message on your screen (middle below). That’s about all there is to your ride.

However, being the ex-hacker that I am, I looked at the version number of the app and got this very weird api message on the right screen shot below. Not sure what all that means but I guess it probably helps the developers debug their app.

Even going on a slight uphill incline, I was able to get up to about 25 km/h and on a flat or downhill road, I managed to go above 30 km/h.

There was one thing that was very strange. Within a few minutes after finishing my ride, someone that I assume works for Wheel came on another Wheel e-bike to presumably pickup the bike. In fact, on my second trip, I came out of the grocery store, thinking I would use it to return home and the bike was gone. It’s possible somebody else used it but I think the Wheels people came and picked it up that quick.

All-in-all, I like being able to sit and the bigger wheels makes it much safer than the tiny wheels on the scooters because of the potholes. It also goes pretty fast and the front and back brakes feels safer. I will continue to use it until something better comes along.

Update 4/16/2019:
After using this service a few more times, I realized that it didn’t state how much they were charging on their website. From my calculations, it appears that they charge about 25 cents per minute but they might be charging 50 cents to unlock. It’s hard to tell because they don’t have anywhere in the app to look at older rides history.

Update 5/10/2019:
On my last ride, when I tried to end my ride, I got an error (see below) and couldn’t end the ride. After about 30-40 minutes, the app apparently automatically ended my ride. I was afraid somebody might turn on the bike and start riding it but I guess nothing happened. I contacted support and they refunded me the extra charges. In any case, I won’t be able to use their service until they fix this bug.

While I was in contact with them, I asked them how much they were charging me per minute and they said $0.25 – $0.35 depending on the area. I told them where I was and they told me they couldn’t tell me exactly. Very strange that customer support doesn’t know how much they charge.