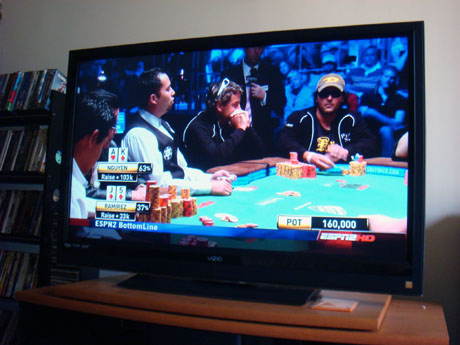 It’s still a year away from analog TV going to digital next year, but my little TV in my bedroom broke.  There’s no way I was going to put one more dime into a CRT, not even a tiny one.  So I decided to move my CRT from my living room to my bedroom, and get a new LCD HDTV for the living room.

Now, you’re asking, why LCD and not plasma?  Good question.  After doing some research, I decided LCD was now the way to go.  The new LCDs have improved contrast ratios, even at the large sizes and viewing angles are better as well.

Vizio is an Irvine, California based company that only makes HDTVs as far as I can tell.  Vizio has gotten positive reviews from CNET, and PC Magazine so I took a good look.  The company is small, and competing against the big boys (Sony, Samsung, LG, Toshiba, Mitsubishi) but they do have something to offer. Low price and good quality.  There’s no way this 47″ LCD for $1,500 (MSRP) is going to match spec for spec against Sony, but if you look at it live at Costco or Sam’s Club, you’ll see the difference is not dramatic.

Straight out of the box, I plugged the provided HDMI cable to my HD DVR from Time Warner and pushed a few buttons on the remote.  BAM!  It was all working.  I went straight to the HD channels above channel 400 and the images were amazing.  The only thing I noticed was on the SD (standard definition) channels, there were some data info (probably closed caption) at the top of the screen that looked like flashing white pixels.  I got rid of it by moving the picture about 2 pixels up via the setup.

This is the first time I’m using HD on my cable and realized that most of my favorite channels (E!, truTV, Spike, and of course G4) are not in HD.  ESPN and ESPN2 seem to have the most HD programming.  The big networks have some HD programming but most are not.  All the old re-runs from the 80’s and 90’s on SD look terrible.  I predict that when everything goes HD, these old SD shows will not be on the re-run list as much as it was before.  That means less residual income for the old shows.

Ah, but I digress.  As for the Vizio, it has PIP (picture in picture) but I hardly ever use it because my HD DVR has 2 tuners so I can record one program while I watch another, so I don’t need to try to watch 2 programs simultaneously.  It does have a side by side PIP feature where 2 shows can be the same size (kind of squeezed).  There’s something called POP also, but I’m not sure if that’s the side by side or something else.  Interesting but I’ve never really used that either.

One other consideration is that Vizio is a new and small company and may not be on the list of codes for your universal remote control.  The code provided on the Vizio “Quick start” paper worked fine for my Motorola HD DVR.  However, there are some functions (e.g. switching video sources) that cannot be controlled properly by the univeral remote, so I still need my Vizio remote.

So far, I have not tried hooking up a game console or blu-ray DVD player at 1080p (since I don’t have one) but I’d have to assume it will look at least as good as the 1080i that I get from my cable, which I’m happy with.

Conclusion
If you’re on a budget like me, this unit is the largest LCD you can get for this low price point at the quality that it delivers.  Any average user will find this more than adequate and a bargain.  I really like that they provide a  free HDMI cable.  That tells me something good about Vizio.  I think the big boys should pay attention.