As you know, I’ve had my love/hate relationship with HP and their horrible customer service.  Well, that honor has moved over to Dell.

Oh, where do I start. After I bought my Dell Studio 17 at Best Buy, I called Dell as soon as I got home to order a keyboard protector and spare AC adapter.  This is what I always do with laptops. Why? Because dust gets into the keyboard and I like a spare AC adapter pre-plugged into the wall at home so I don’t have to get it out of my laptop carry bag.  But I digress.

Toshiba has keyboard covers for all their laptops, while HP doesn’t have any last time I checked.  How about Dell?

Well, I tried looking on the Dell website with no success.  So, I called Dell’s customer service toll free number to find out.  As it happens, I talked to “J.Z.” at Dell who told me that he had the keyboard protector and AC adapter for my laptop and would send it out right away. According to my Ooma account, that call took 32 minutes. That seems a little long but at least it appeared that things were going fine.  My order on Dell’s website appears below:

So I made the order on Friday and I got the UPS shipment 3 days later on Monday.  Wow. So far so good.  I was getting ready to write up a nice glowing report for Dell.  I open the package and I can tell right away that the keyboard protector is too small. It’s for a 13″ laptop, while my Dell is 17″.  Damn it. Also, the power adapter is not Dell but from a company called “Targus.” Strange that Dell wouldn’t sell their own power adapters.  In any case, I bring it home to try it out.

As soon as I plug the AC adapter to my laptop, I get the following dialog box:

WTF?! Oh no! J.Z. totally screwed me over. So, to summarize, after a 32 minute call to J.Z. at Dell, he sent me the wrong keyboard protector and wrong power adapter.  Wow. This beats all records on incompetence.

Now comes the “Hell” part of this story.  First, let me show you my Ooma call log to Dell: 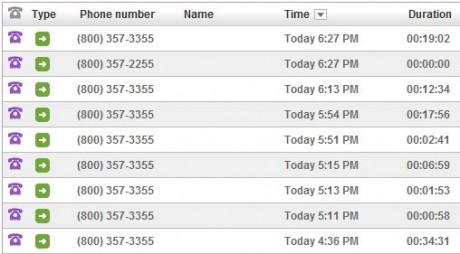 As you can see, I started my calls at 4:36pm and finished a little before 7pm. I’ll spare you the details of call after call without any success.  I talked to Christian, Raoul, Rod, J.D. and some others I forgot to get their names or I got disconnected before I even got their names.  On one call, they transferred me, and the automated machine told me that I got transferred to a non-existing extension and hung-up on me. Very nice Dell.

Another thing that made these calls “Hell,” was the slowness of their order computers. It was so slow that most of them would put me on hold for 2, to 3 times per call for 3 to 5 minutes at a time.  Or maybe they were just playing Solitaire while I was on hold. Luckily, I have a speaker phone so I can just wait for them to return.

Actually, the ones that didn’t put me on hold was worse.  They would all try to sell me more crap. Mostly, they tried to sell me more RAM for my laptop. I kept telling them it was already maxed out at 4Gigs, but they would still look it up on their slow computer, then tell me that it was maxed out. Yes, I just told you that. Then, they would try to sell me a LCD HDTV. Buddy. How about trying to look for that keyboard cover instead?

Are you getting the “Hell” part of this picture yet? I was really getting frustrated.  It’s funny but they would give me a number and extension to call if I got disconnected, but when I would call that number and extension, it was apparently busy and the automated phone machine thingie would just get confused and hang-up and I would have to start all over again from scratch. It actually started to get funny after a while because it was so ridiculous.

Call after call, I got transferred until finally, Christian told me that Dell doesn’t have a keyboard protector for 17″ laptops. Just groovy. This after another guy asked me if I wanted the plastic or rubber version of the protector.  One guy was finally able to give me the return authorization number so that I could return the crap they already sent me, but I wasn’t able to order anything from that guy and I got disconnected. Dell really needs to get their act together.

At the end, J.D. finally came right out and told me the other guy sent me the wrong AC adapter and that he would send out the right one.  At this point, I didn’t care that my credit card wasn’t going to get a refund for weeks for the wrong stuff I got. I just wanted to get the “F” off the phone. I told J.D. to go ahead charge me for another one and send me the correct adapter. By the way, the correct one was about $30 cheaper than the wrong one. Go figure.

So now I still needed a keyboard protector, so as per my usual procedure, I looked on eBay and found one from Hong Kong for $10 (the wrong one from Dell was $16), with free shipping.

Well, this story of hell does have a happy ending.

Fast forward 6 days and I got both the Dell AC adaptor and the keyboard protector from Hong Kong on the same day.  Interesting that the shipment from Hong Kong takes the same amount of time as the UPS shipment from Dell in Lockbourne, Ohio.  The keyboard protector for $10 cost them $5 for shipping (free shipping to me).  So $10 minus $5 shipping equals $5. How do these people make any money?

This time, the Dell AC power adapter was the right one.  However, the adapter that they sent was not exactly the same as the one that came with the laptop and did not have the cool blue light on the end.  Oh well.  At least it works.

So what’s the moral of this story? Good customer service is hard to find in the tech world. But when I do, I’ll write about it. I hope I live that long.