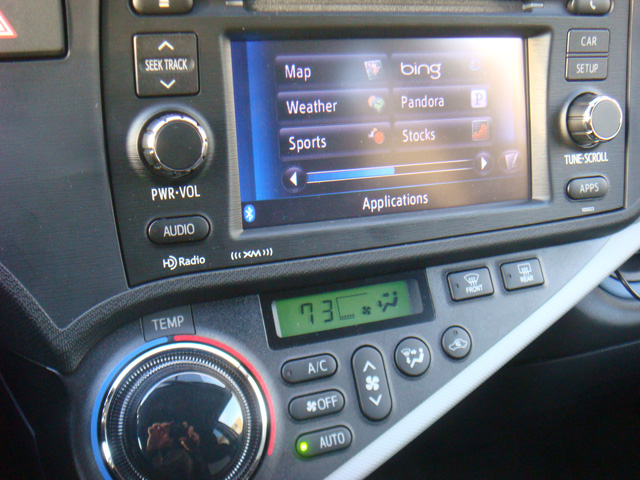 Last time, I gave me first impressions of the Prius c. This time, more on the interior and usage of this new Hybrid vehicle.

The picture below shows a  closeup of the seat. I don’t really like the light color in the middle because I’m sure it will get dirty as the car ages. My old Matrix had a seat that was entirely charcoal which hid stains a lot better. 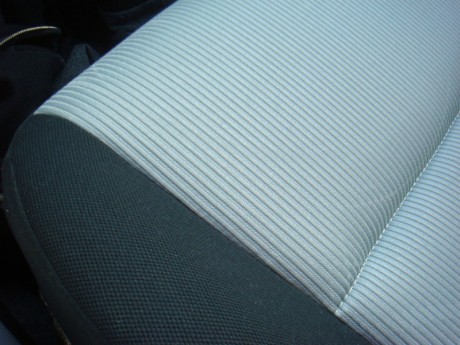 The next picture (below) is a USB/phone jack station on the passenger side of the car. It’s a good place to put your phone while you use the USB to charge it. I’ve never had this feature before and I’ve always had to put my phone in the cup holder in the past. It might have been better if the plug was facing towards the right instead of towards the seat.

The next picture is the middle rear passenger seat belt which hangs from the ceiling in the back area. I’ve never seen this before but apparently this is a new safety requirement for new cars. It’s a little ugly but safety first. 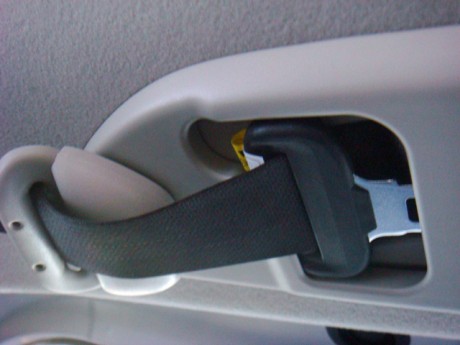 As you can see below, the left side of the steering wheel has the radio volume control, mode and cursor, and below that cluster is the voice control, and cell phone controls. This is the first car I’ve had that has the volume control on the steering wheel and it’s very convenient. Looking down at the radio to change the station and volume can be very dangerous while driving. You can control the navigation, make calls via blue tooth, and play music all by voice control. The other 2 buttons allows you to answer/hang-up the phone. 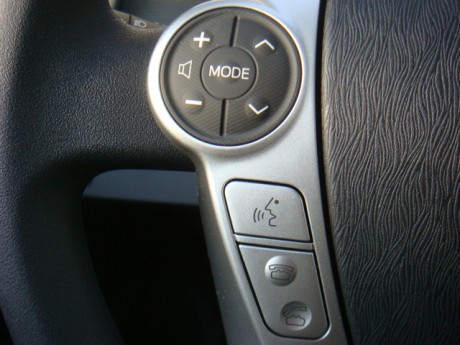 The voice control does not work very well. If you are searching for something very simple like “Restaurant,” it will work. However, you will have to slowly grind down the multi-levels to get to what you want. Since the voice recognition is so bad, it will give you a list of possible choices. Then you can choose one by the number. It’s still easier than trying to type on the touch screen (more on that next time) but it can get frustrating. Too bad they didn’t put Siri into the car.

The right side on the steering wheel (see below) has the temperature control, and controls to navigate on the top display. Again, I like having the controls on the wheel but they also have a big temperature wheel below the Nav display. 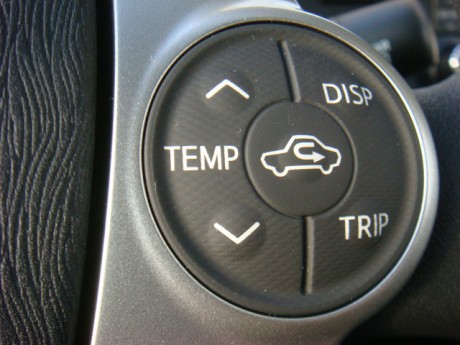 While on the topic of the steering wheel, unlike my last Toyota, it is not perfectly round, and is slightly oval. Apparently, this is the new cool way to make steering wheels but if you like to let the wheel turn quickly under your hands after a turn, it won’t work as you would normally expect. Also, the silver plastic portion of the steering wheel feels and sound like cheap plastic… because it is.

The usual electric door locks and windows are there in the next picture below. As with most cars these days, the driver side window will automatically open without having to hold the button. And unlike my Matrix, you can also have it automatically close as well. You can also lock the windows for the passengers so they can’t open them. 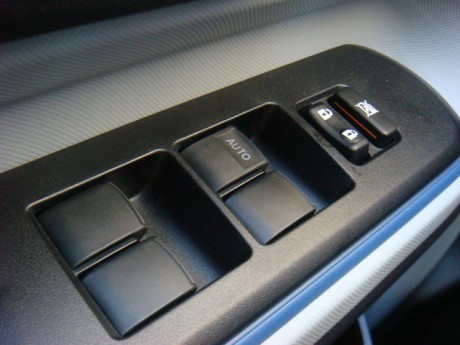 Below the gear shift, there are 2 buttons: ECO mode and EV mode. When in EV mode, the car tries to use electric power only but cannot go faster than about 25 mph. Therefore, it’s very hard to stay in this mode unless you are driving in a parking lot or practically in a parking lot on the freeway. If you drive too fast, it will automatically get out of EV mode. I have not been able to use this mode for very long in real life situations.

The ECO mode tries to save gas by limiting the use of the air conditioner and acceleration. When I tried using it, I really didn’t notice too much difference but I wasn’t trying to drive very fast. How much fuel it really saves is not clear. 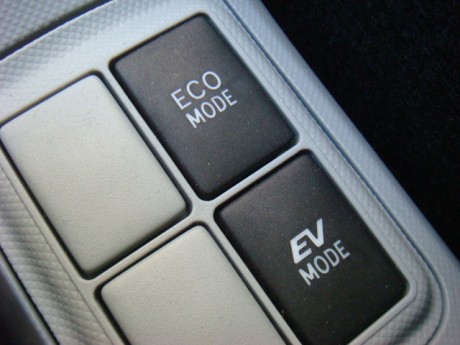 For some reason, unlike the old Prius, Toyota decided to make a big-ass gear shift. I’m not sure why they chose this design because it takes up a lot of space in the tiny subcompact. That space could have been used better. In fact, because the space between seats is so narrow, they took the cup holders and put it above the gear shift. This makes it very hard to grab your drink while driving. I liked the design of the Matrix better where the cup holders where below the gear shift. 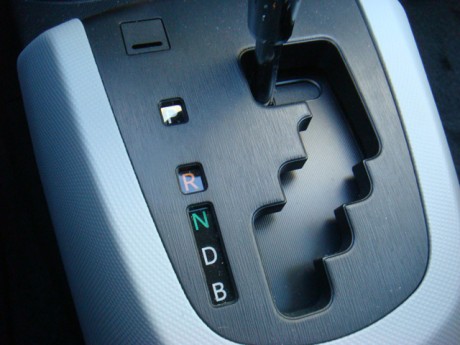 The picture below is an ultra-close-up of the dash material. It looks like some type of fake plastic snake skin. The color doesn’t really turn me on and I’m sure it will get dirty quickly. If this was Toyota’s idea of trying to make the car look less cheap, it didn’t work. 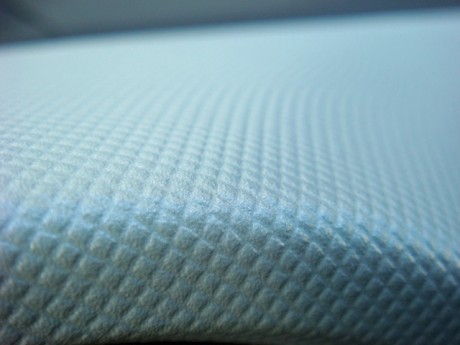 The next picture is the top display located above the dash, inset back so that it is protected from the sun. The left side is the speedometer and fuel gauge, and the right color display can show a variety of status information about the car. The picture shows one called the “Eco” screen which is basically a game that helps you try to get higher scores by driving more economically. I’ve managed to get 94 out of 100 but it’s hard to get anything higher in real world driving conditions. To get high scores, you have to start up slowly, cruise without too much change in speed, then stop by applying the brake very slowly. Nobody drives like that all the time, but it trains your brain into driving the way you need to, in order to save gas. 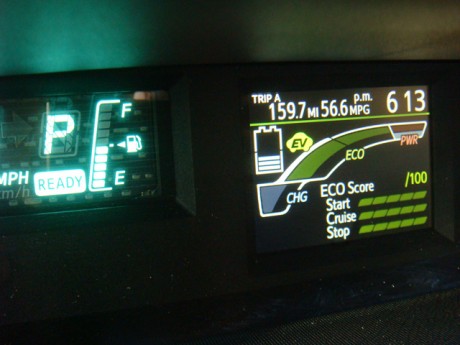 Both displays in this area are very easy to see and shows tons of information. It would have been nicer if the MPG and gas gauge were also using the high resolution screen (instead of the cheaper LCD), but I guess they have to save a few bucks here and there.

So far, I am averaging about 52-54 MPG per month. Interestingly, the more city driving I do, the higher the MPG. The more fast freeway driving I do, the lower the MPG. At first, it’s counter intuitive, but obviously, the “c” in Prius c stands for “city” and indeed, it was designed to work well in city conditions as advertised.

The last picture is the big color navigation screen and the climate control below it. I will go into detail about the Entune and Navigation screen in the next installment. All I will say now is that unlike the top display, this display is not inset so the sun glare often makes it almost impossible to see the screen. Even in the picture below, you can see the glare of the screen. The GPS in the Navigation system works fantastic, compared to the GPS in my cell phone. There must be some huge GPS antenna on top of the vehicle.

As for the climate control, I’ve never had one before and having it computerized is great. The only thing that is strange is the crazy big temperature wheel they put to the left. With the steering wheel temperature control buttons, why is this big wheel needed? If it’s for the passenger, it should be on the right side. It just seems to waste a lot of space for no reason.

One small feature that I really miss is automatic headlights that turn on when it’s dark. It’s bad enough that I have to remember to turn on my lights at night, I have to manually turn it on when I go into underground garages or tunnels. Also missing are the multiple compartments in my Matrix that allowed me to store a bunch of stuff hidden from view.

Another difference is the rear blind spots, which are much larger than my old Matrix.

In conclusion, there are a many things I like with the Prius c, including:

All in all, if you want an attractive looking Hybrid that gets great mileage in the city, as well as on the highway, but don’t want to spend a ton of money, this is the vehicle for you. It has a lot of features that are only found on more expensive models at a very reasonable price. But the low price does mean a few shortcuts have been made so there is no mistaking this car for a luxury vehicle.

Next time: Entune and Navigation

Update August 2012:
After using the car for longer and driving more on the freeway, I am now averaging 47-49 MPG per month. It’s still beats my Matrix which was down to about 26 MPG near the end.