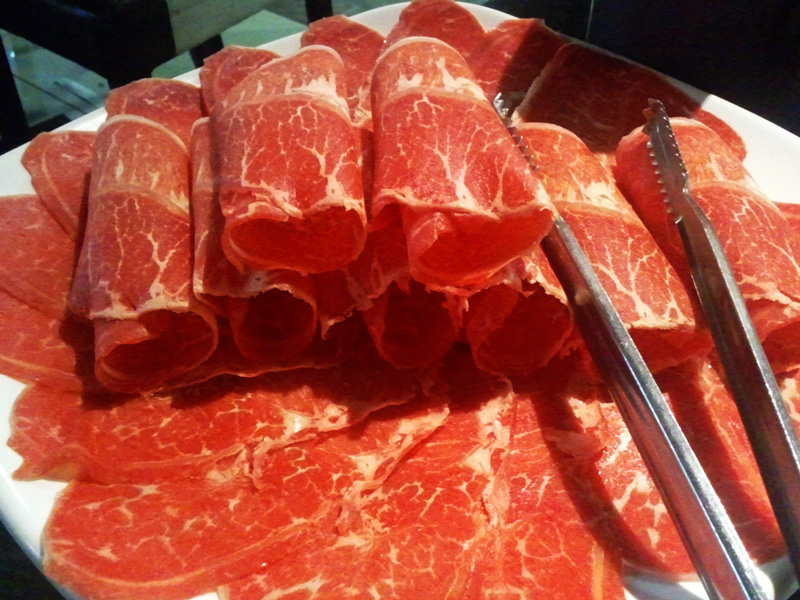 Apparently Manna Korean BBQ used to be located in Korea Town but they have moved to Downtown LA around December of 2011. Manna is located on the 3rd floor of  the Little Tokyo Shopping Center where Sushi Go 55 and Honda Ya are also located. The new location looks nice with a cool looking sign outside and the mall offers tons of free parking in their multi-level parking structure. Spoiler alert: That ends the pleasant part of this review.

Before you enter this enormous restaurant, you will see the sign below touting the “Mnna” special sauce with “Happy Ending” for $3. Who can resist a happy ending for $3?  That’s how they trick you into the restaurant.

But I digress… as usual.

On my last visit a few months ago, I tried their “All You Can Eat” Korean BBQ and I was not impressed. They have a free buffet that I didn’t care for, and although they were more than happy to bring more meat, I had enough of it and stopped.

So this time, I decided to try their “all you can eat” Shabu Shabu for $18. They also had a more expensive version for $25 but I passed. As you can see below, the New York steak meat looks lean but perhaps too lean. Traditional Shabu Shabu usually use less lean meat. Of course, this is a Korean BBQ place and not a Japanese Shabu Shabu place so I can’t get too picky. Or can I? 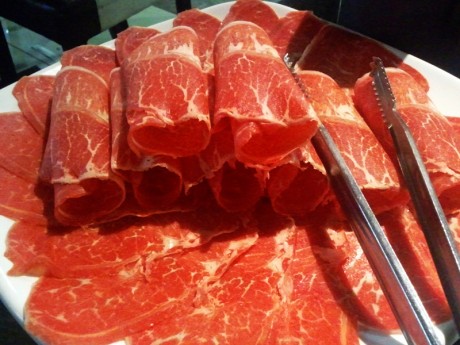 What really turned me off was the veggie plate which looked like somebody just threw a bunch of left over stuff onto a plate and served it to me. Not only was it full of mushrooms and chopped up veggies, there was only one small piece of tofu and no Udon noodles (as advertised on the sign outside). How do they expect you to put those small chopped-up veggies into the boiling water and pick it up with your chop sticks?

In all the years of trying Shabu Shabu restaurants in Japan, Hawaii, and California, I’ve never seen anything like this before. There is no way that the owner of this restaurant has ever tried eating this big mess themselves. 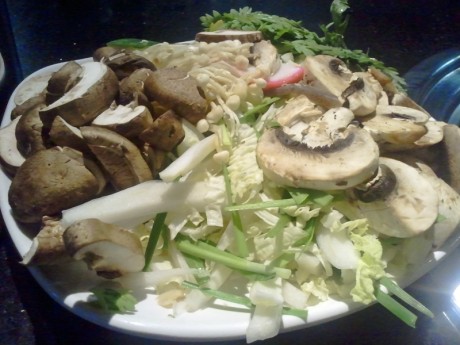 Unfortunately, the nightmare doesn’t end there. The thick peanut sauce and horribly sweet ponzu sauce completely ruins the meal. I’ve touted Shabu Shabu House for their ponzu sauce previously in another review. That’s because that’s what makes or breaks a really good Shabu Shabu place. And in this case, it’s about as broken as Humpty Dumpty.

To see what the veggie plate should look like, take a look at my review of Shabu Shabu Ya down the street from here. To top it off, they don’t give you white rice. Shabu Shabu without rice? Oh, the humanity!

Yes, I know Manna is all you can eat for only $18. But all I was able to eat was a few bites and I was ready to leave. Incredibly, the service was so bad, I had to walk around the restaurant to find my waitress for my check. I asked for my check at the register and paid her on the spot so I could get the hell out of there as quickly as possible.

I did not get my happy ending porridge for $3. Perhaps that would have made the difference. Or not. The only good things I can say about this place is they have a slick website and their Kimchi is good. My prediction is this place will be closed in a year.

All in all, do not come here for Shabu Shabu. But if you want a place for a big party to drink and eat a little Korean BBQ… on second thought, stay away.