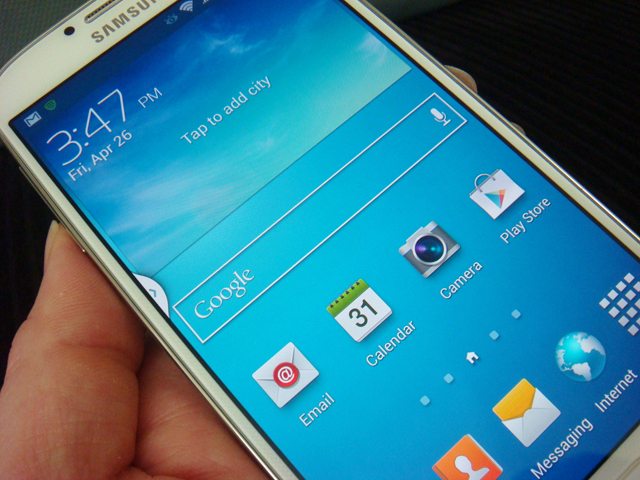 Here are the top 5 features of the Samsung Galaxy S4 according to the Sprint website:

Let’s see if these really are the key features or not.

Air View:
This is a very interesting feature that is not available on any other device that I am aware of. 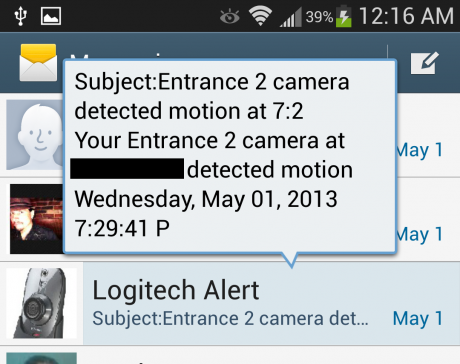 In some apps that are Air View compatible, when you put your finger over some areas, you will get a pop-up with more information. It’s the same as hovering your mouse over objects on a website that causes pop-up tips to appear.

You are seeing an example above where I put my finger over the text message sent from my Logitech Alert camera and the pop-up shows me the entire message, alerting me to some motion that was detected.

Frankly, if the phone was very slow and I didn’t want to wait for the screen to switch to the full view, this would be a great feature. But because the phone is so fast, it’s just as fast to go ahead and touch the item, rather than try to move your finger close to the screen without touching it.

It is helpful when you want to quickly scan a bunch of messages for something without having to touch each one. One thing is for sure. Forget about trying to use this in a moving car, especially if you’re driving.

But there are apps that make good use of this feature. If you’re blind like me, when you are in the browser, you can hover your finger over text or picture and it will be magnified so you can read it. When you are in the photo gallery, it will show larger thumbnails of the picture when you hover of the small thumbnail.

Also, the video player app allows you to see a small thumbnail image of the video by putting your finger over the video status bar at the bottom. This will allow you to find the place in the video that you would like to skip to. Note that this feature does not work in the Youtube app.

Actually, “Air View” also includes other “air” stuff like “Air jump,” “Air browse,”  “Air move.” and others. More on this in my next post.

Conclusion:
So far, I’m not super impressed. Perhaps, it’s one of those features that because I never had it before, I don’t really know I needed it. Perhaps, one of these days, I’ll be eating and have crap on my hand and love the “air” features. For now, I’ll keep the “Air” options turned on and see if it grows on me.

WatchOn:
This is a combination TV remote and guide in one app. When you first launch it, it will ask you some questions to figure out what you like to watch, and what cable service you use, and in what area, and finally it will go through a process for identifying the code for your TV and cable box/set-top box remote controls.

Once you get through the setup process, you will get a list of TV shows that are on that you might like. It doesn’t seem to be trying to get super clover like a Tivo, but just shows you a Sports if you like sports. 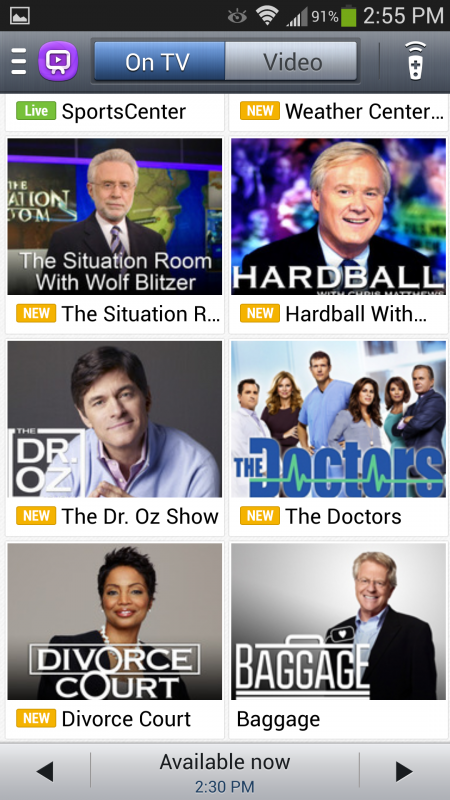 One feature that’s pretty cool is when you see a show you want to see listed, you touch it and it sends out the remote control IR codes to your cable box (or set-top box) to change the channel so you can watch it. It’s a little better than just trying to channel surf blind.

The “Universal remote” also does allow you to go to your favorite channel just by touching the icon, or you can manually change the channel like a real remote.

One problem I have is that I’m using a separate Samsung Soundbar for the sound and it does not have a separate setting for that. So I still have to use the soundbar remote to change the volume. It would be super cool if this app could mute the sound automatically when I get a call. Or maybe it does and I just don’t know it. 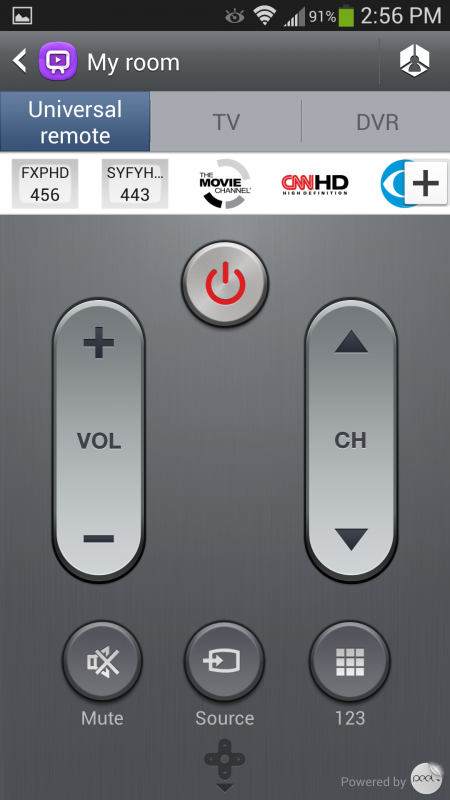 You can also control the DVR from this remote. Amazingly, I was able to go to the different menus, make selections, and do everything that I can do with my DVR remote. 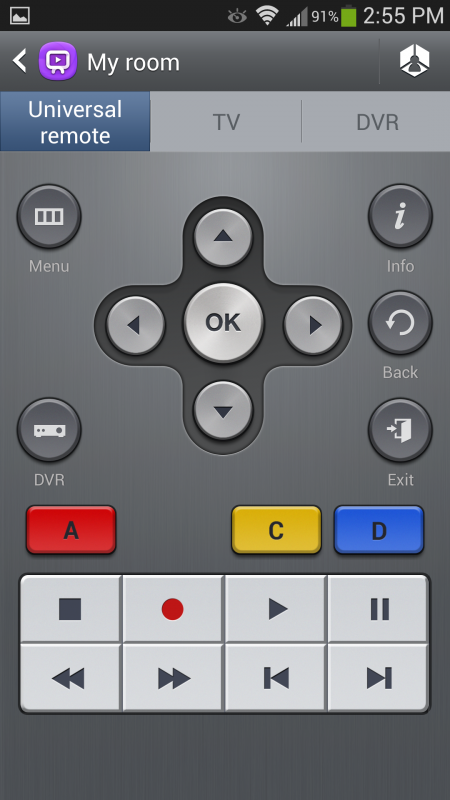 There’s just one problem. When I use my DVR remote, I use it to skip over commercials, and the way I do it is by holding the remote in my hand and pressing fast forward, then moving my finger over to play, then fast forward again if needed. I do all this without looking at my remote because I can feel where the buttons are. I can’t do that with this app. I can’t “feel” where the virtual buttons are so I have to look down. But if I look down, I can’t watch to see if the commercials are over.

Conclusion:
If this app had a button to skip 30 seconds forward (like my old Tivo), I would use it. Otherwise, I might use it now and then for channel surfing but I will never use it for my regular DVR viewing.

Smart Pause:
When this feature is turned on in Settings, the phone will look for your eyes during Youtube video play and when you look away, it will automatically pause the video. At least that’s what it’s supposed to do. First of all, it only works in fairly bright lighting conditions. If you like watching your videos in the dark, just forget about it. In fact, even in a dimly lit room, it does not work properly.

Not only that, I tried it with glasses and it does seem to get confused, perhaps because of glare. As you might expect, it does not work at all with sunglasses. What I didn’t expect was that it also gets confused when I bring my hand to my mouth. Mind you, I’m not covering my eyes. Sometimes it would recover, but sometimes it didn’t.

What it does do is pause when you put the phone down. That can be useful, and you can override it by touching the play after you put it down.

Conclusion:
This feature is very similar to the Gesture Control on my Samsung TV. It only works when the conditions are perfect, and if you like watching video in the dark like a lot of people, this just doesn’t work. I’ve left it on for now but if it gets annoying, I’ll have to turn it off.

S Beam:
This is the Samsung version of the Android Beam, which allows you to share photos, videos, contacts, and web page links by touching the backs of units with others with the same feature. This sounds like a great feature until you realize that it only works with the newer Samsung devices (e.g. Galaxy S III,  Galaxy Note II), and not any of the old Samsung devices, like my old Epic 4G. Because all my friends have the iPhone, I have not been able to test this feature.

Update:
After a lot of searching, I finally found somebody that had a Samsung Galaxy SIII. When we tried the NFC, the phones would connect, and appear to transfer but never get to 100% completion and end with an error. Then we tried “Wi-Fi Direct”, which uses Wi-Fi to connect the 2 phones and transfers the file that way. This method is not as cool as NFC but it worked. However, it took some time to scan for the other phone, which defeats the purpose of this feature.

Conclusion:
This might be a really cool feature if it worked on other devices like the iPhone. But since it doesn’t, it’s not very useful unless all your family members or friends have the newer Samsung phones.

Samsung Link:
This used to be called “AllShare Play,” and still is called that on my Samsung TV. What it’s supposed to do is allow you to share content (e.g. music, photos, videos) between your computer, phone and TV. I have no interest in doing that with my computer for fear that it might slow it down, or worse, have all my files be stolen by settings things wrong.

But for this review, I tried to connect my phone and TV without success. Perhaps installing the “Link” software on my computer is required to make it work properly. If that’s the case, that’s why I couldn’t get it to work. Also, I noticed that my TV firmware is not currently upgradable. I’m not sure why this is but perhaps the big upgrade announced at CES 2013 is coming out.

It’s also possible that it doesn’t work because I need to fiddle with my firewall settings on my wireless WiFi router. If that’s the case, I think it would be nice for Samsung to provide some step by step instructions on getting it to work. I’m sure my setup is not unusual and others will have similar problems if this is the case.

Conclusion:
For people that like watching their videos that they shot on their S4 on their big screen, this is probably a great feature. I’m not interested in doing that so it’s not of interest to me.

Final Conclusion (Part 1):
Out of all the features listed on the Sprint website, I’d have to give “Air View” as the feature that’s most impressive when I show off my new phone to my friends.

Originally, I was excited about the TV remote feature but after getting it, it seems more like a gimmick. If it worked with my Samsung Soundbar, I’d be loving it.

I would use “S Beam” to share photos but there’s nobody I can use it with. I’ll just keep using MMS to send my pictures to my friends, and they don’t have to be next to me.

All in all, there’s no “killer feature” that stands out on this list for me. Maybe there’s something on the Samsung feature list, which I will pick over next time.