Last time, we looked at one of Samsung’s feature list. Amazingly, Samsung has yet another webpage that touts the features of the Galaxy S4. This one seems to be geared more towards a younger audience than the last one. 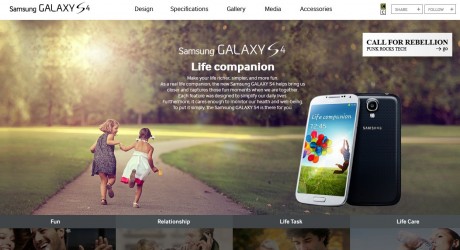 Up first, what to do with your S4 when you are at a party – Fun: 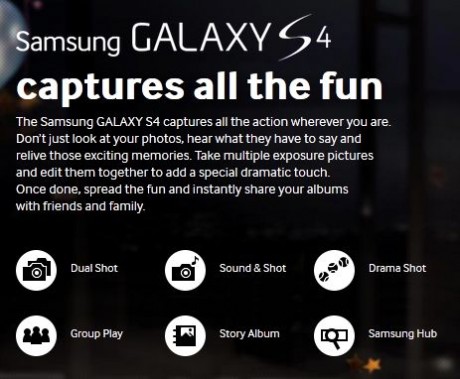 Dual Shot:
This camera feature allows you to include yourself into your picture by using the back facing camera. As you can see in the Samsung “demo” picture below, this is for people that always wants to make sure they are getting their fair share of attention, even when they are not in the picture.

You can resize and move the thumbnail, and even change the way it looks to fisheye, heart shaped, and other useless options. You can even use split the image in half and see yourself on the left, and the front facing camera image on the right.

Conclusion:
So far, I’ve not had any reason to use this feature. I suppose if you want to make a video showing your kids and your reaction to your kids, this might be handy. But for me, there’s a reason why I’m taking the pictures. Because I don’t want to be in the picture.

Sound & Shot:
This records 3 seconds of sound along with the picture. Perhaps, this is perfect for sending grandma the kids pictures along with “Hi Grandma!” sounds.

Conclusion:
If a picture is worth a thousand words, how many words are a picture and sound worth? How about just sending a short video instead? This hybrid sound and picture feature will be gone by the next version of the Galaxy.

Conclusion:
Is it just me or wouldn’t “action” be better as a video? I doubt I’ll ever use this feature.

Group Play:
This feature allows you to synchronize and use multiple Galaxy devices as speakers to play the same music.

Conclusion:
First of all, the Galaxy S4’s speaker is not so great that I want to use it as an amp to blare out my music. Second, I had trouble finding somebody to try the S Beam feature (touching phones to share) so you can forget about finding somebody that will allow me to drain their battery so I can listen to my music on my crappy tiny speakers on my phone. This is a feature looking for an application. Dumb.

Story Album:
When you take a bunch of pictures at an event, “Story Album” will automatically combine these pictures into a story telling album. You can even apply themes and layouts to make it easier for lazy people. Then, you can use Blurb to have it made into a real album (for a fee) that you can give to somebody.

Conclusion:
If you are super lazy, and want to give a gift to somebody just by paying some money, this is a good idea. Blurb has an app for the iPhone but apparently there isn’t one for Android. So basically, this feature gets around this deficiency.

Samsung Hub:
I’ve already discussed this in Part 2, so I’ll just say that this is the Samsung version of iTunes.

Conclusion:
Yet another place to buy music, video and e-books, but not as content filled as iTunes. Skip it. 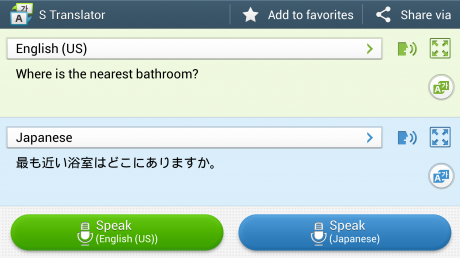 This is Samsung’s version of Google translator. You can say the phrase, then it will not only translate it to the language you chose, but you can also make it say it. As long as you are in a quiet room, the voice recognition is fairly good. But realistically, if you are traveling and you are trying to tell the cab driver where to go, the ambient noise will cause problems. Of course, you can type the sentence, then translate and have it say it out loud. It’s still quicker than looking up each word in a translation dictionary, the old school way.

Conclusion:
If you’re traveling, this could be a life saver. For day to day use. Not so much.

Basically, this is Samsung’s version of FaceTime with extra features. Not only can you make a video call, you can also just chat, group chat, share photos, and generally waste a ton of time. This app is built in to the S4 but it’s also an app for Android and iOS. As you can see above, one person, out of almost 1000 in my contact list, has signed up on ChatOn.

Conclusion:
Since I never used FaceTime on my iPhone 4, it’s unlikely that I’ll be using this feature. Frankly, I don’t even like to talk on the phone that much, let alone let my friends see me in my underwear while talking to them. The big problem here is I’d have to convince others to download and sign-up on this app. That’s a big hurdle in my book. 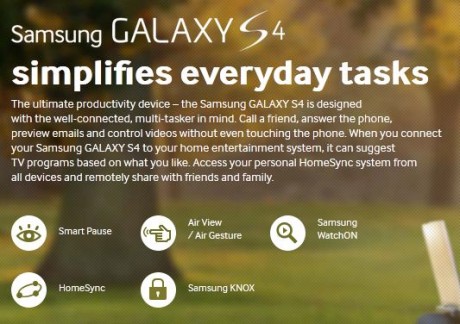 Smart Pause:
As reviewed in part 1, when activated, Youtube videos will pause when you look away. Unfortunately, the Netflix app doesn’t use this feature. It also doesn’t work in a dark room and conditions must be almost perfect.

Conclusion:
Thanks but no thanks. I’ll just use my finger to pause the video. I’m lazy but not that lazy.

Air View / Air Gesture:
As reviewed in part 1, when activated, Air View allows you to hover over items to get more info, while Air Gesture allows you to wave your hand over the device to scroll or go to another tab in the browser.

Conclusion:
First off, hovering over the screen without touching turns out to be harder than you think. And the information you get isn’t all that great. So I see a slightly larger thumbnail when I hover over a smaller thumbnail in the picture gallery. So I can read more text when I hover over my email summary page. Try hovering in a moving car. Forget it.

Waving to go to the next page in the browser is slightly useful in that it automatically goes to the exact next page. In other words, you don’t have to scroll and stop when the bottom of the previous page reaches the top. But it gets annoying quickly when it sometimes doesn’t work, or scrolls when you were just moving your hand around.

It’s not “Minority Report” yet. This feature is not ready for prime time.

Samsung WatchON:
Once again, I reviewed this at length in part 1. This app is a TV guide and remote control combination.

Conclusion:
If your cable box or set-top box is lame, you might think of using the TV guide. Unfortunately, at least for now, this TV guide is lamer.

The remote does work and combines the DVR and TV into one place. However, I have a screen lock on my phone to prevent people from going into my phone. That means I have to press the home button, then unlock my screen, before I can use the remote. By that time, whatever I wanted to do is over.

Also, unfortunately, I hate having to look down at the screen to figure out where the buttons are. I’m still using my old physical DVR remote for now.

HomeSync:
This is a black box from Samsung that you buy to give you 1TB of personal cloud space to put all your music, video and photos onto.

Conclusion:
Spend more money for basically a NAS that only works with Samsung hardware? Not interested. Next.

Samsung KNOX:
According to the Samsung website, this is a feature that let’s your company I.T. department to split your phone into a work area and personal area.

Conclusion:
For people that need to get permission from their I.T. department before buying a phone, this might be a deal breaker if it didn’t have this feature. As for me, no thanks. 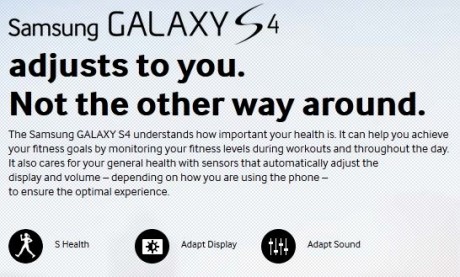 S Health:
This app helps keep track of your exercise, food intake, and weight. As you walk, it counts your steps, calculates the calories burned, and keeps tabs for each day. You can look back on the daily history to see how you’re doing. 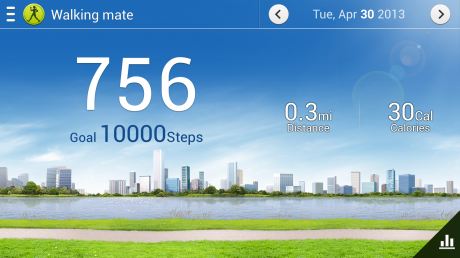 You can look at a chart to see if you are walking more each day.  It also interfaces with other Samsung devices (like a scale) to keep track of your weight. If you’re into fitness, this might help keep track of things a lot better than paper and pencil. 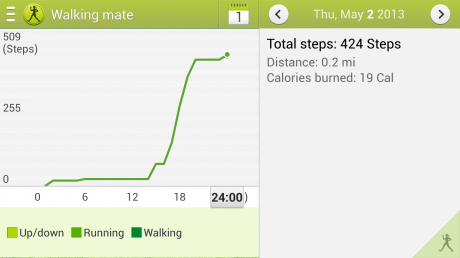 The app also tells you the temperature and humidity levels in the “Comfort Level” screen. For people getting ready to do some exercising, this might help determine what to do and for how long. 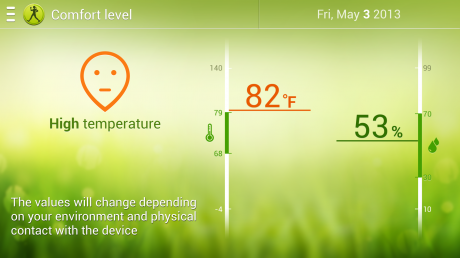 Conclusion:
As I get older, I’m becoming more health conscious and this app might help me start losing some weight. I’ll be using it. 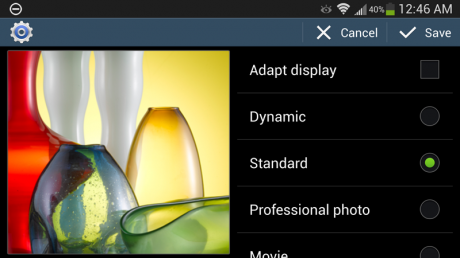 When this mode is activated, the screen will automatically adapt according to the content being displayed.

Conclusion:
It’s hard to figure out if this is really doing what it’s supposed to but I like the idea. I’ll leave this option on.

Adapt Sound:
This setting requires you to plug-in the head phone, then listen to beeps on the left side and right, and “teaching” the phone how to adapt the sound according to your actual hearing abilities. 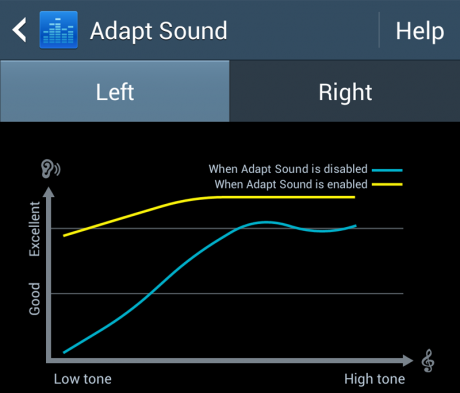 As you can see, my left and right ears do not function exactly the same way. I’ve know about this problem for many years so it wasn’t a surprise to me.

Conclusion:
Nice feature for people with some hearing loss, like me.

Final conclusion (Part 3):
This feature list is the most comprehensive by comparison to the ones in part 1 and part 2. The camera “modes” are gimmicky and not very useful. I’ve never needed to use Google translator so I doubt I will use S Translate, same with ChatOn. Most of the “Life Task” ones are also gimmicky and I’ll probably not use them very often.

However, I do plan on using S Health and will leave the Adapt Display and Sound modes active.

All in all, the Samsung seems to have decided that quantity is better than quality when it comes to features. Just throw them all at the wall and see if any stick. Unfortunately, this is the wrong approach when it comes to features, especially when you list them on your website. People will try them and that at best, it’s useless, and at worst, it doesn’t function properly, which only leads to bad PR in reviews.