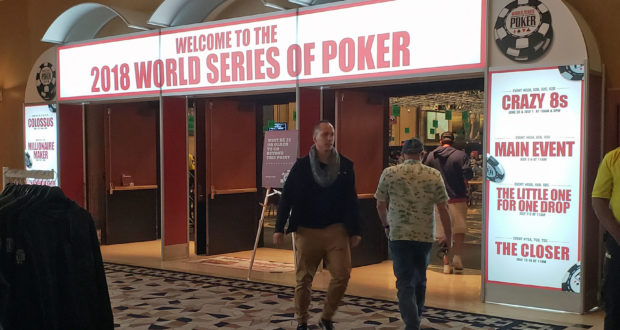 Once again, it’s that time for all poker players: The WSOP 2018 at the Rio in Las Vegas. Like last year, you were able to register and pay online to speed up the process. Once at the Rio, you still needed to check-in when you arrived for the first time. Once that was done, if you wanted to sign-up for other tournaments, you could do so online, then get your seat card using these Fas Trac kios printers shown below.

There were also other new technologies available, including a kios to rent phone chargers…

… and a demonstration of a $12,000 digital poker table from Galshan Digital shown below. I’ve seen similar systems that were more animated so I wasn’t impressed by this one.

Some of the tournaments were using the “new” large big blind method of collecting the ante. This makes it much easier and faster for the dealer. I’m going to predict that this will be used more and more in the future. All-in-all, the WSOP seems to be doing fine as evidenced by the fact that there were more main event entries than last year.

Now for an update of the Rio Hotel & Casino review.

Back in 2014, I reviewed the Rio Hotel and gave it less than a glowing review, to put it mildly. Upon entry, like last year, I noticed that they had kiosks for check-in. I was unable to make it work last year, but this year, I was able to check-in completely using the kiosk without talking to a live person. So there was no standing in line at all. The kiosk gave me my card door keys and off to my room I go.

That ends the good part of the review. Now for the bad.

The first thing I noticed when I got to my room was this apparent hole that was covered up with a metal plate next to the door. It was very strange looking but I guess it’s better than a hole.

Next, I walked to the small area where the closet is located and I noticed that the carpeting had worn out against the corner. It’s a little messy and could easily be fixed by cutting the falling piece.

In the closet, there is a complimentary safe, as in most hotels these days, to avoid having to lock up valuables for the guest. However, under the safe, there was a hole in the wall with an AC outlet. Nothing was plugged into this outlet and there didn’t seem to be any reason why it was there but it sure looked ugly.

Now I look up at the ceiling next to the bed and see what appears to be water leakage that has rotted. Considering that the Rio had a legionnaires disease scare last year, this is not a good look. In fact, I was scared to sit near that part of the room.

Next, I went into the bathroom and noticed the same calcium deposit on the faucet that I noticed 4 years ago. Apparently, in 4 years, they have decided not to do anything about it. I know that housekeeping probably are not given the tools needed to clean something like this, and it would have to be done by a maintenance staff. Needless to say, I did not drink the water from the faucet.

Finally, I looked in the shower and there were what appeared to be mold and mildew on the ceiling and tile.

After seeing the mold, I wasn’t at all surprised at the calcium deposits on the shower head. In fact, I fully expected it.

It’s clear the the Rio Hotel & Casino is not doing very well. In fact, other than the WSOP, I suspect they might be losing money. Everything seems to be falling apart and getting extremely old.

Previously, there was a casual restaurant that was located on the way to the tournament area. It has been changed to a chain called “Hash House A Go Go,” and breakfast only place that closes at 1pm. I realize that normal people eat breakfast but most poker players can’t even get up by the crack of 1pm.

This year, like last year, room service was not available after lunch, before dinner time. Since dinner break for the WSOP is between 3:30pm and 4:30pm, there is no way to pre-order food and have it delivered to your room. That used to be one of the big perks for staying at the Rio during the WSOP, but no longer. Now, you will have to endure uncleanliness and worn out rooms in order to save about 20-30 minutes of travel time to the tournament room from another venue.

I wish Caesars Entertainment, the parent company of the Rio, would change their priority and put some money back into the Rio for the poker players. It hasn’t happened in at least a decade, if not 2, so I doubt anything will change in the near future. It’s more likely that they will move the venue to Caesars Palace than throw money away on the Rio. If legionnaires disease didn’t force them to clean things up, I don’t think anything will. Maybe they’re just waiting for the building to implode on it’s own and collect on the insurance.