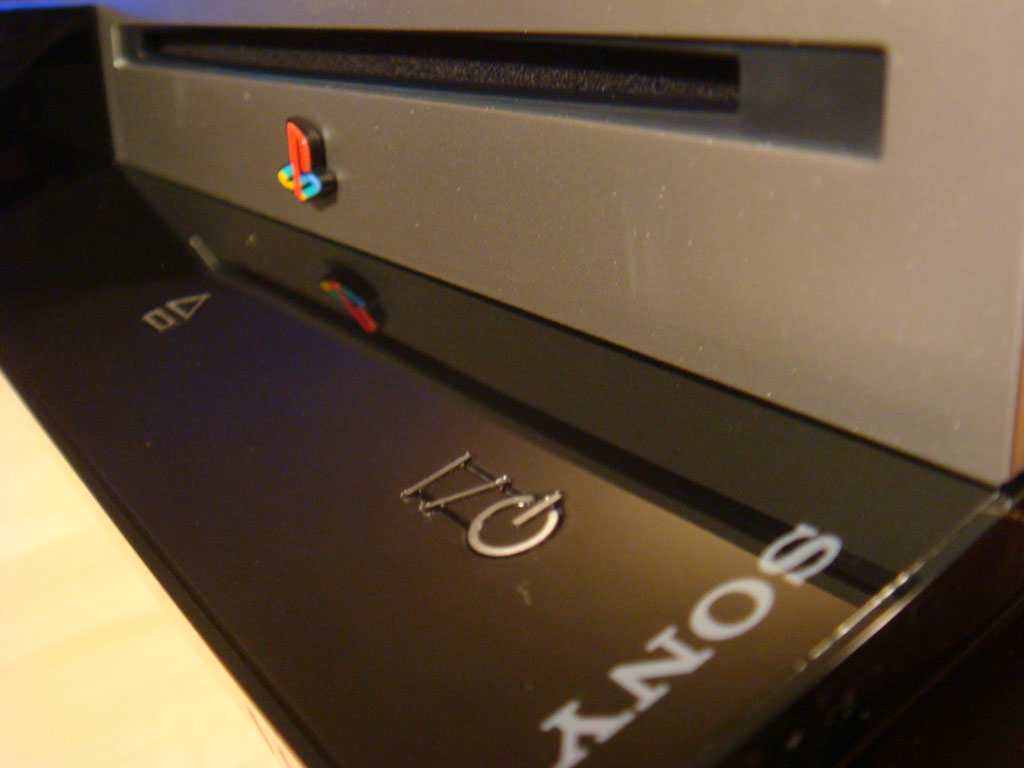 According to Gizmodo, this model is CECHK01 and the main difference with some previous units are: 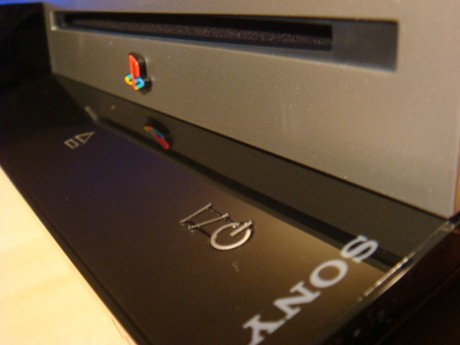 As you can see from the picture above, the Blu-ray eject and power “buttons” are touch sensitive.  It’s cool and maybe I’m just paranoid but I’ve always liked “real” power buttons in case the software completely crashes (or decides to take over the world).  There is a “real” power switch in the back of the unit so I guess it’s safe.

Under this top area is the lower area shown below. 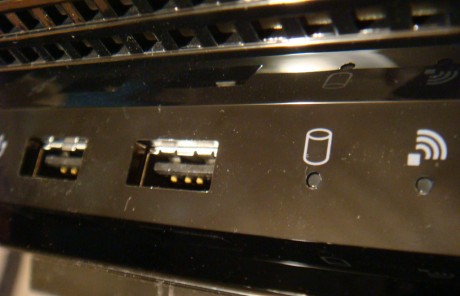 You can see the 2 USB 2.0 ports and LED indicators.  The HD indicator LED is yellow and the Wi-Fi is green so that you can tell what’s going on from far away.

Plugging a USB flash drive worked flawlessly and I was able to copy some MP3 files onto the PS3.

For me, the main attraction was the Blu-ray disc player so that I can finally watch Blu-ray movies on my HDTV in full 1080p resolution.  Here, the PS3 delivers the goods and more.  Basically, for the price, you get a Blu-ray player with a free game console.

On this topic, the PS3 also upconverts your old DVDs to 1080p and the image does look better than what comes out of my old DVD player connected as 480i to my HDTV.  Of course, the PS3 also plays CDs so you can get rid of your DVD and CD players from your entertainment center. 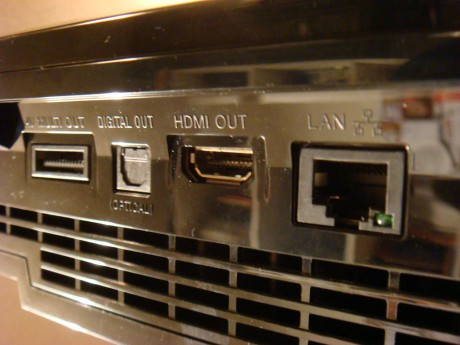 Back with AV out, Digital out, HDMI and LAN

The back of the unit (shown above) shows the single HDMI output (no HDMI cable provided) and the LAN plug.  Since my PS3 is far from my computer, I am using the built in 802.11b/g Wi-Fi to connect to my wireless router.  It’s slower but more convenient.

Once I was connected to the Internet, I signed up for the free PlayStation Network membership.  Yes, free.  Did you hear that Microsoft?  Then, I downloaded a new version of the PS3 firmware, and for fun, downloaded HD movie and game trailers, free demo games, and themes for the PS3.  For most downloads, you can do it in the background while you do other things.  The Wi-Fi connection also allows you to access your favorite MP3 music, pictures or videos from any Windows Media Center compatible PC.  More on this in another post.

The proof that the PS3 runs a real OS (and GUI called XMB) is the ability to multi-task.  For example, you can play music and use the Internet browser.  However, there are limitations.  For example, if you try to look at pictures, it will ask to close the browser. Of course, if you start a video, the music will stop automatically. 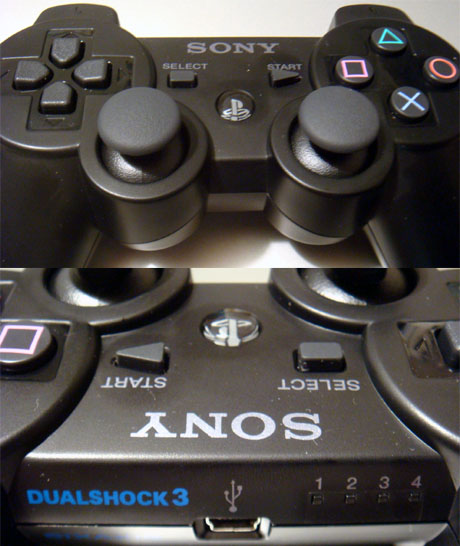 Included with this model is the Dualshock 3 wireless (Bluetooth) controller.  Reports are that the Dualshock 3 has weaker rumble than the older PS2 Dualshock 2 to save battery power because it runs on battery.  However, there’s 2 separate vibrators which allows for “stereo” vibrations in this new controller.  I was able to play for 6 hours without running out of juice so the battery is not that weak.

The Bluetooth connection is great because it’s wireless but you don’t have to worry about distance or direction.  As a matter of fact, you can be so far away from your TV, you can’t even see what’s written on the screen, and it still works.

Now for some small negatives.

One complaint I have is that the controller does not charge (using the included USB cable) when the PS3 is off.  Therefore, either you have to leave your PS3 on, or charge it while you are playing.  Charging it while playing using the included USB cable it not an option because it’s too short.  Alternately, you can buy a controller charger from a 3rd party, or use any USB port on a computer to charge the controller.

Another small complaint is if you store the PS3 sideways (that is flat instead of tower style), the top is round so you really can’t put anything on the unit (e.g. Game controllers, DVD cases, etc).  Yes, the styling is cool but it would be nice to have room there for your stuff.  Maybe they just don’t want you to put your drink on there and spill it.

One other thing I noticed is the browser runs out of memory easily.  It’s nice that you can open up multiple windows and browse several websites simultaneously, but you can quickly run out of memory.  It’s odd that this box can run games faster than most PCs, but runs out of memory browsing myspace pages.

All in all, I’ve been very happy with this game console.  I’ll have more on Blu-ray movie quality in another post but I’ll just say that it’s great.  One thing is for sure.  Between playing next-gen games and watching Blu-ray movies, I don’t think I’m going to have much time to write any reviews. 🙂

Previous: Vonage Kicks My Ass as a Parting Shot
Next: Google Chrome Great for Web Designers